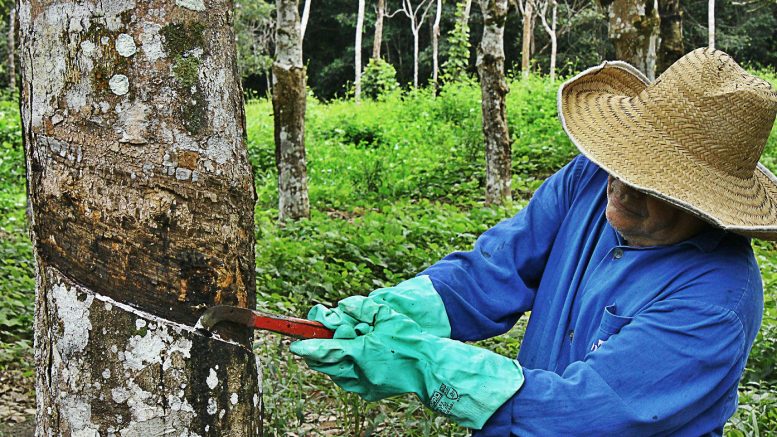 “While NGOs, international organizations, social movements and researchers defend a new bioeconomy based on the ‘standing forest’ and on extractive collection as salvation for the Amazon, we are witnessing domestication in the region.”

Alfredo Homma is an agronomist with a master’s degree and Pd.D from the Federal University of Viçosa, a researcher at Embrapa Amazônia and collaborator of the master’s course in environmental sciences at the University of the State of Pará. 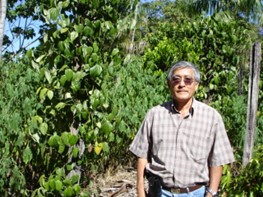 AgriBrasilis – What is the historical outlook of agriculture in the Amazon?
Alfredo Homma – Agriculture in the Amazon has gained national and international relevance. Mato Grosso State is the largest national producer of soybean, corn and cotton and has the largest cattle herd. Pará State is the largest producer of açaí berries, jambu (Acmella oleracea, also known as paracress) and cassava since 1992, pineapple since 2015, cocoa since 2017, of buffalos, etc.;
Rondônia State is the largest breeder of native fish, second producer of conilon coffee and urucum (Lonchocarpus urucu). Tocantins State ranks third in rice production. The Amazon is not just deforestation and fires. Naturally, these results came with great social and environmental costs.
With some emblematic products of the region, the opposite occurred. Since the 1980s, the State of Bahia has concentrated 70 to 75% of Brazilian guarana farming; States of São Paulo, Santa Catarina, Goiás, Paraná and Bahia concentrate 90% of the national production of peach palm heart; Espírito Santo State became the largest producer of black pepper in 2017 and São Paulo is the largest producer of rubber (latex).
In São Paulo there are nine cities that singlehandedly produce more rubber than the North Region. The Hawaiian papaya introduced by Japanese immigrants in Pará State was transferred to Espírito Santo, making it the largest national producer and exporter.
While NGOs, international organizations, social movements and researchers defend the new bioeconomy based on the “standing forest” and on extractive collection as salvation for the Amazon, we are witnessing domestication in the region.
The cacao tree was taken to Bahia in 1746, leading to the loss of competitiveness with the cultivations. Rubber tree was taken by the British in 1876 to Southeast Asia and in 1910 the production of rubber in that region surpassed the Amazon, leading to greater economic, social and political chaos resulting from the biopiracy of an active product of the economy.
From 1974 onwards, guarana farming surpassed extractivism. In 1990, rubber production from farms in the country exceeded extractive production. Planted wood surpassed extractive wood, not to mention peach palm, mallow, cupuassu (Theobroma grandiflorum), jambu. Despite the strong lobbying, extractive rubber does not represent even 0.5% of the total natural rubber produced in the country.

AgriBrasilis – What is the situation of deforestation and degradation of the Amazon? Is it possible to restore degraded areas?
Alfredo Homma – There is a shift from livestock to agriculture in the most dynamic areas of the Amazon states that make up Matopiba [savanna area in the States of Maranhão, Tocantins, Piauí and Bahia], in addition to Rondônia and Pará, using areas of degraded pastures for planting grain, reforestation, planting oil palm, coffee, cocoa, etc.
For medium and large entrepreneurs, it does not pay to leave an ox per hectare in the face of more competitive alternatives. Among small farmers, as in the Southeast of Pará, the movement is the opposite: the most efficient seek to change from “stump agriculture” to a low-productivity small livestock production.
It is necessary to reduce the cost of recovering degraded areas in the Amazon. This was the mistake of Brazilian environmental policies between 2004 and 2015, when we went from a deforestation level of 2.5 million hectares to less than 500 thousand hectares.
The reduction in deforestation was not accompanied by a concrete policy for the use of already deforested areas. Unfortunately, from the second Dilma Rousseff government onwards, deforestation began to grow and, in 2021, it reached 1.3 million hectares. Since 1986, Pará has led with almost half of deforestation, followed by Mato Grosso and Rondônia. The big news in 2021 is that the State of Amazonas is taking the second place.
Pastures represent 61% of the deforested areas in the Amazon, an area larger than two States of São Paulo, where 43% of the national cattle herd is concentrated. These pastures are characterized by technological heterogeneity, from producers performing embryo transplants to small producers obtaining one liter of cow’s milk/day. There is a need to modernize the sector to reduce the pressure of deforestation of dense forests or secondary vegetation. It is possible to reduce pasture areas, doubling the stocking rate of the cattle herd.
We need to use the existing limestone, phosphate and potassium deposits in the Amazon region to recover more than 10 million hectares of degraded pastures, an area larger than the State of Pernambuco. As we have 40 million hectares of pastures in good condition, which last 10 to 12 years, this means that every year we need to recover 10% of the area to cover depreciation, something around 2 to 3 million hectares/year.
Pará acquired half of fertilizers and wheeled tractors sold by Santa Catarina State in 2020. The current conflict between Russia and Ukraine and the concentration of the sale of fertilizers for soybean, corn, sugarcane, cotton and coffee, which accounted for 83% of fertilizer consumption in the country in 2020, will harm smaller crops and pasture recovery. 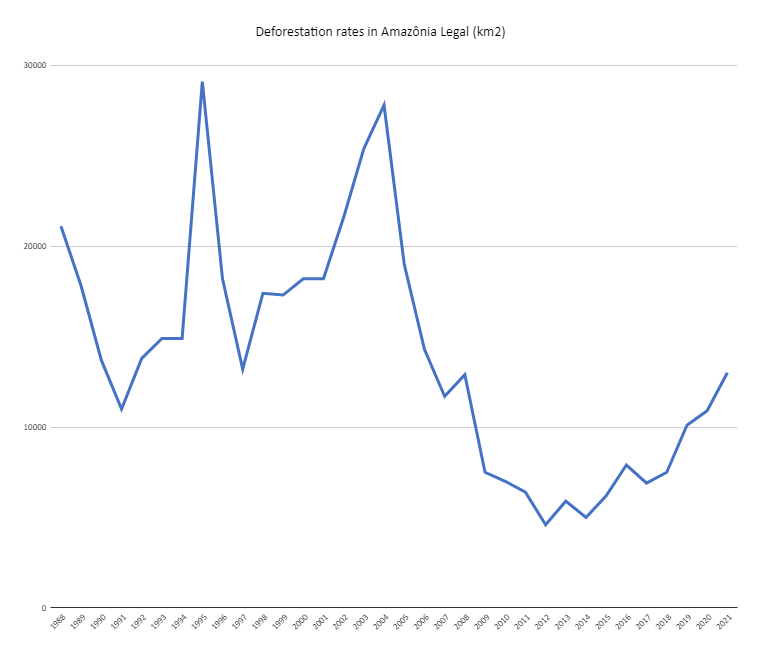 AgriBrasilis – What measures should be adopted to reduce impacts of deforestation, fires and predatory extractivism?
Alfredo Homma – There is a need to increase inspection and monitoring. Everyone knows where deforestation, mining, logging, invasions of indigenous and quilombola communities, narcoeconomics, smuggling of flora and fauna take place.
Any trader in these places can see when and where pedestrians are moving, chainsaws, tractors and food are being moved, indicating the need to inspect and monitor the main roads and rivers.
Presence of the Armed Forces in these strategic locations is important, in which the absence of the State presents a fine line, with no guarantees regarding personal safety for technicians from IBAMA, ICMBio, State and Municipal Environment Secretariats.
I see no difficulty in reducing deforestation by medium and large farmers, as it represents only 17% of those in the 2017 Agricultural Census. As for small farmers (83%), due to their dispersion, they are more difficult to monitor and inspect. In this case, deforestation itself must be part of the environmental policy until technological and economic alternatives emerge for this productive segment. 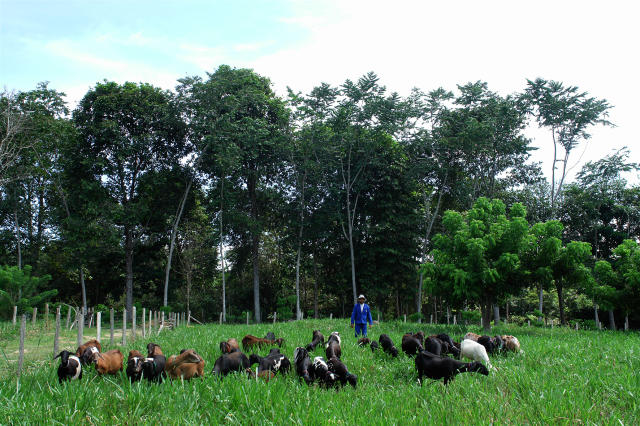 AgriBrasilis – How is it possible to combine sustainable production with agricultural development in the region?
Alfredo Homma – Sustainable development does not exist, but a more sustainable development is possible. There is already a lot of deforestation in the Amazon and we need to move from speech to practice.
Japanese immigrants who settled in the city of Tomé-Açu in 1929 remain in the same place until today, after 93 years, indicating that permanence depends on the type of activity, technological level, formal education, effort and existence of markets.
Without markets and profitability, it is not possible to guarantee economic, social, political or environmental sustainability. Many proposals put into practice in the Amazon are imaginary, dependent on other actions or government transfers.
We must support the food security of the populations in the region (vegetables, rice, small animals, fruit trees), put an end to imports of cocoa, palm oil and rubber, which add up to US$ 1 billion and 600 thousand hectares that could be planted with these three crops in the next 5 to 10 years, with an assured market.
We must promote a revolution in fish farming, increase livestock productivity in the medium term to reduce pasture areas by half and double the current reforested area of one million hectares.

AgriBrasilis – What does the law says about obtaining new land for cultivation?
Alfredo Homma – I argue that it is more profitable to use land for productive purposes than to acquire land for speculative purposes.
The market for leasing land for grain, reforestation, oil palm, cocoa, pasture, etc., has grown in recent years in the Amazon.
Greater monitoring and inspection could break the mechanism for creating new agricultural frontiers, end the compensation of Legal Reserve Areas and Permanent Preservation Areas, comply with the requirements of the Rural Environmental Registry and end the action of reduced groups of producers and speculators, who are denigrating the image of the group of Amazonian farmers.

AgriBrasilis – What are the most economically relevant species and how is biopiracy fought?
Alfredo Homma – Plants that present prospects of being planted in the closest places of consumption are the açai palm, bacuri tree (Platonia insignis), cupuaçu tree, uxi plant (Endopleura uchi), jambu, among others, and are an invitation to biopiracy.
About the fauna: the arapaima, tambaqui and other Amazonian fish of gastronomic value. Potential locations for biopiracy would be Vietnam, as well as other Asian and African countries. Vietnam has become a major producer of tropical products (black pepper, rubber, coffee, cocoa, cashew nuts, etc.), with cheaper labor, less environmental restrictions and close to large consumer markets such as China and Japan.
Biopiracy has been around for millennia. Brazilian agriculture is practically exotic (coffee, soybeans, corn, cattle, buffaloes, poultry, orange trees, banana trees, black pepper, etc.). The New World’s contribution to world agriculture was cassava, potatoes, corn, rubber trees, cocoa trees, tambaqui, among the main ones.
The formation of a strong productive park, with the domestication of the resources of the Amazonian flora and fauna that have markets is the best defense against biopiracy. There is the old bioeconomy already known: alcohol fuel, wines, beers, cachaça, cheeses, yogurts, etc. As for the new bioeconomy in the Amazon, it will depend on planting extractive species that have reached the limit of their supply capacity, trying to verticalize them and discover new products. It is not by collecting the standing forest.

Product for emergency use