“… well-distributed rainfall favors the development of the disease …”

Cláudia Godoy is an agronomist, PhD in Phytopathology from the University of São Paulo. She is a researcher at the Brazilian Agricultural Research Corporation (Embrapa Soja), working in the field of Phytopathology with an emphasis on epidemiology and control of soybean diseases.

Soybean Asian rust, caused by the fungus Phakopsora pachyrhizi, is the most severe disease on soybean, which can cause up to 100% reduction in productivity. Damage depends on when the disease hits the crop (the earlier, the greater the potential for damage) and the climatic conditions after incidence. Well-distributed rainfall favors the development of the disease. Despite being a severe disease, there are effective fungicides to control it.

In recent years, the management strategies adopted have reduced the incidence of the disease and helped in management, preventing losses in yield. Among these strategies, we highlight the adoption of the sanitary vacuum (fallow period), which is the period without sowing soybeans in the off-season, with the objective of reducing fungi population in the environment and delaying the occurrence of the disease during the harvest. Another strategy is the concentration of the sowing window with the use of precocious varieties of soybean. The use of early varieties has been more intense in recent years, mainly in areas that aim to establish succession planting with plants such as corn or cotton (in a smaller area, but still significantly in the Cerrado – Brazilian Savannah). As soybean sowings succeed one another and the sowing window extends, the fungus inoculum multiplies in the first sowings and under favorable conditions, the disease starts earlier and in later sowed plants.

In the first sown plants, depending on the region, other leaf diseases tend to predominate such as target spot (Corynespora cassiicola), powdery mildew (Erysiphe diffusa), brown spot (Septoria glycines) and Cercospora leaf blight (Cercospora spp.). Fungicides are used in the first sown plants to control leaf spots and also white mold (Sclerotinia sclerotiorum), which contributes to the control of Asian rust.

In 2021/2022 harvest, the first occurrences of Asian rust were reported on the Anti-Rust Consortium website as of December, in the states of São Paulo, Paraná and Minas Gerais, following the same trend as in previous harvests. Until the end of December, the low frequency of rainfall in the Southern region in the months of November and December has harmed the development of plants, also not favoring the incidence of diseases, including Asian rust. In the Center-North region, excessive rainfall has favored the incidence of white mold in regions with inoculum of the fungus.

Although Asian rust is favored by well-distributed rainfall, excessive rain can limit its spread by washing the spores from infected leaves. Weather conditions until the end of December, with extremes in both regions, explain the lower number of reports of the disease compared to previous harvests until the end of December. However, there is a need for greater care with plants still under development, especially in regions where rainfall is more regular and fungicide applications are being compromised by weather conditions. 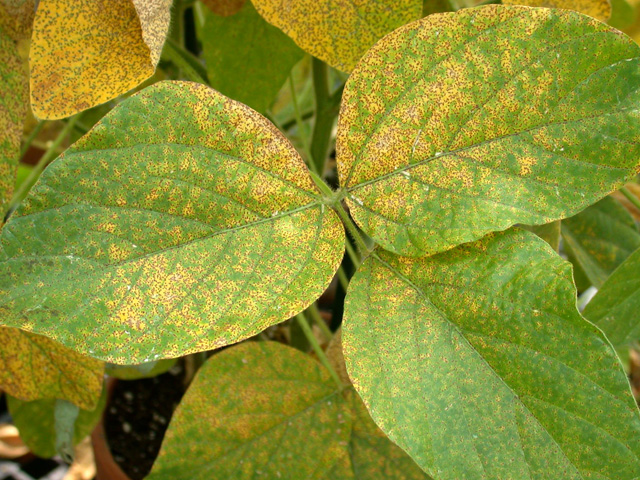 Typical browning of the leaves caused by Asian rust