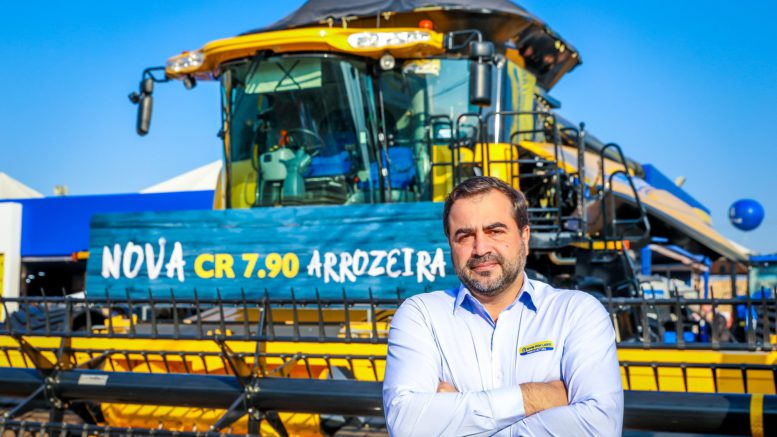 According to ANFAVEA ² when comparing the results for the years 2018 to 2019, domestic sales fell 8.4%,
machinery production fell 19.1% and exports rose 1.5%. The tractor market in Brazil is predominantly composed of international manufacturers, with emphasis on Massey Ferguson, John Deere, Valtra
and New Holland. Leading local manufacturers are Agrale and Jacto.

In order to understand this market, AgriBrasilis interviewed Eduardo Kerbauy, Market Director for
New Holland Agriculture in Brazil. The company is part of the CNH Industrial Group, which has been operating in the country since 1975 with 7 factories, 200 dealerships and more than 400 resellers. In 1986, New Holland incorporated Ford Tractors, becoming one of the leaders in the sector. In 2019, New Holland produced 7,948 tractors (22% of the national market) and 2,272 grain harvesters (36% of the national market).

The company also manufactures sprayers and seeders. Eduardo Kerbauy recognizes the unfavorable performance of the agricultural machinery industry, but remains optimistic about 2020.

AgriBrasilis – What launches are planned for 2020 and did the agricultural machinery market meet expectations in 2019? Does Brazil have the potential to be the global leader in the sector?
Eduardo Kerbauy – This year we will present many new features that will surprise the market. A record harvest is expected in Brazil, leading us to believe we should surpass the USA in soy production. This gives us confidence that the sector will not leave continue to grow. We had the best December since 2014 considering the number of new vehicle licenses. It is the third consecutive year of growth in the sector, despite the 8.4% drop in sales of agricultural machinery in general.

According to ANFAVEA ², the sector is expected to grow 5.4% this year. Domestic sales are expected
to rise 2.9% and exports, 1%. It is still slow growth, but we are optimistic that the sector is on the right track. Brazil has the ability to lead the production of agricultural machinery.

AgriBrasilis – What kind of technology is present in the machines and implements?
Eduardo Kerbauy – Our machines today incorporate a lot of technology. We have a very innovative  precision agriculture system; incorporating a telemetry portal with connection to other digital agriculture
systems. It is information that stays in the cloud, being aggregated in one space. It is part of a strategy to develop flexible, open and connectable solutions.

A platform was launched that agronomically manages the property, seeking to integrate data such as
soil fertility, productivity, meteorological data and satellite images, helping the producer to intervene at
the right time and place. In addition, the platform also makes it possible to analyze operational data from the machines. It is still possible for New Holland Agriculture customers to connect their current and older machine fleets to the platform. The technology can also be used with mixed fleets.

AgriBrasilis – incentives to leverage agricultural machinery sales? Regarding the installation of the company in the national territory, was there any kind of incentive offered by the government?
Eduardo Kerbauy – The main government incentive for rural producers to purchase agricultural machinery is financing, which basically depends on the interest rate. The investment line of the Program for Strengthening Family Agriculture (Pronaf) and Mais Alimentos (More food) received a new contribution, of R$ 1 billion (US$ 805 million), according to the Ministry of Agriculture and the Central Bank.

This is the second credit contribution made by the portfolio for this modality in the 2019/2020 Harvest Plan (economic plan made by Brazilian banks to provide credit for planting). Regarding the original resource, the Pronaf investment line has already received R$ 14.8 billion, an increase of 14.5% (R$ 1.9
billion) when compared to the R$ 12.9 million initially granted. In the 2020/2021 Harvest Plan, almost R$ 2 billion (US$ 468 million) more were allocated to agricultural credit programs compared to the previous crop year.

According to the federal government, the Modernization Program for the Agricultural Tractor and Implements Fleet (Moderfrota) received approximately R$ 9.7 billion (US$ 2.27 billion). Regarding incentives for the installation of factories, proposals include tax exemption for donation of land, an investment that creates jobs along with the collection of taxes, in addition to moving other sectors around the factory.

AgriBrasilis – It is noticed that the machines and implements developed today have a lot of potential that is not yet explored by the farmer. What would be the reasons for this?
Eduardo Kerbauy – The main difficulty that producers face is the lack of connectivity in the field, due to the absence of telephone networks. This is the main obstacle to the use of technology embedded in the machines. However, that has been changing due to programs like ConectarAGRO, a program that was created to encourage the improvement of rural connectivity. This program addresses the fact that the number of people who do not have access to telephony in the field is 21%, according to IBGE ³.

It is a premise to work with open technologies that have a global standard. The idea requires having access to  the internet throughout the national territory, especially in rural properties.

AgriBrasilis – The cost of purchasing and operating machines in Brazil is still a challenge for the producer, what is the influence of the rise in the dollar?
Eduardo Kerbauy – Exchange rate variation is a challenge for all sectors of society, including rural
producers. But I believe that the biggest challenge is interest rates for agricultural subsidies in the country.
More than a cost, renewing the agricultural machinery fleet is an investment, which will result in greater productivity and reduced production costs. With more and more embedded technology, the machinery justifies the investment with increased production.

AgriBrasilis – What are New Holland’s prospects for 10 years from now?
Eduardo Kerbauy – We see the sector with a lot of optimism, mainly because the Brazilian economy is on a recovery trend. We have seen an increase in market share over the past 5 years, especially in tractors and harvesters, especially those designed for precision agriculture. We hope to continue growing together with Brazilian agribusiness, which with each harvest surpasses records.

Combating the smuggling of pesticides in Brazil