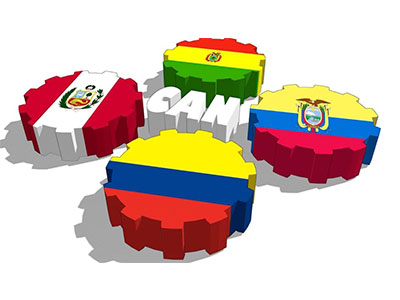 The Cartagena Agreement, in 1969, originated the Andean Pact, a customs and economic union, in order to restrict the entry of foreign capital into the Andean Community. Originally, it was composed of Bolivia, Chile, Colombia, Ecuador, Peru and Venezuela. In 1973, the Chilean government decided to leave the Andean Community to open its economy to the foreign market. In 2006, the Andean Community has another great loss with the exit of Venezuela – largest oil producer in the Latin American continent and part of the Organization of the Petroleum Exporting Countries (OPEC).

The four remaining member-countries are still aimed at creating a common market, as the process of
economic globalization presupposes. Thus, they commonly defend their interests and promote their
development. 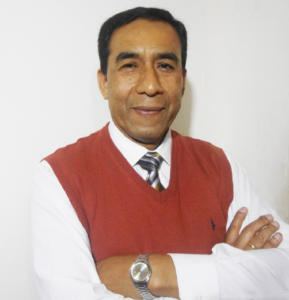 AgriBrasilis – What is the main objective of the Andean community today?
Díaz – Institutionally, the Andean Community’s objectives are to achieve comprehensive and autonomous development, besides accelerating growth in the region, aiming at the gradual formation of a Latin American common market. This set of basic purposes remains intact until the moment, although we must remember that the scenario of the 70s and 80s was marked by governments that promoted the planning of their efforts. Subsequently, they had to face the great external debt crisis, which complicated the sociopolitical economy of the countries.

Nowadays, the market is evident by an unstable trend: an economic slowdown in developed countries and a greater emphasis on the Chinese economy, and very recently the scenario was complicated by the presence and expansion of the global pandemic, which is slowing economies down to very high rates and that could take us twenty years ago at the level of GDP.

In this recent context, the main objective is to accelerate integration efforts to reduce external vulnerability, improve the position of member countries in the international economic context, harmonize policies and actions to tackle the COVID-19 pandemic and continue to advance the Andean Community’s initial goals. 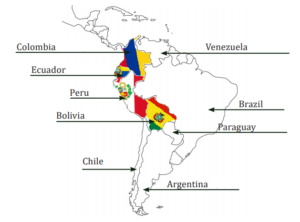 AgriBrasilis – What is the importance and interaction of the bloc for the Latin American economy?
Díaz – According to statistics from the International Monetary Fund (IMF), Andean Community’s gross domestic product represents 15% of Latin America. Relations have been active, in which countries increasingly supply the large markets in Argentina and Brazil with food of fishery and agricultural origin.

The Andean Integration System favored regional groups in Latin America, including the models for integration agreements of the Southern Cone Common Market (MERCOSUR) in different aspects, in politics, for example, there is the Andean parliament, and in the economy new commercial and customs actions have established free trade and the common external tariff.

AgriBrasilis – What were the benefits for the member-countries, since its creation? The bloc has resulted in growth and economic stability?
Díaz – The benefits were very positive, considering the history of commercialization of processed goods. In the past two decades, the trade has been very dynamic, so that exports between the four countries rose by more than four times, taking advantage of the growth of the world economy. Peru’s trade increased more than six times, while Colombia, which is the country that most participates in volume, has grown just over three times.

In the 1970s, about 35% of trade between the members consisted of manufactured products. After fifty years of integration efforts, this number has increased to over 85%, which was an important achievement.

AgriBrasilis – What are the main products exported by the Andean Community? Which agricultural products stand out?
Díaz – Generally, they are composed of industrialized or processed petroleumbased products, derived from petrochemicals, non-metallic minerals and derived from agricultural products. Bolivia is the economy that has the highest degree of concentration of its exports in a small number of products, since only three products concentrate 90% of all exports to Colombia, which are soybean oil, soybean bagasse and sugar.

Peru, on the other hand, exports processed minerals and, at lesser extent, quinoa and cotton. In the case of Ecuador, there is a focus on marine products such as fresh, frozen and canned tuna and molluscs, in addition to wood products, rubber, rice, sugar and coffee. Colombia is the economy with the highest degree of export diversification, as well as the one with the highest added value, such as vehicles and automotive parts, plastics, paper, medicines, cosmetics and sugar. Peru is similar to Colombia, but with a greater share of less processed agricultural goods, such as copper, zinc, iron, ceramics, sugar, rice, coffee and currently
tangerines and onions.

AgriBrasilis – Do bloc countries find difficulties in the agricultural market due to external competition?
Díaz – Initially, membercountries agreed to work under a common customs zone and thus administer a Common External Tariff, however, over the years the agenda was suspended. Even so, our policy has already weakened access for other products from non-member countries.

AgriBrasilis – How is the trade balance between the member countries?
Díaz – When the free trade zone started, the rules were improved, going through the elimination of taxes and trade restrictions until its automatic release. Currently, certification of electronic origin is being
promoted to facilitate trade between partners.

The classification of products in the Andean Tariff Nomenclature System is being improved. Progress has been made in the development of phytosanitary standards in food safety.

AgriBrasilis – What are the main import goods of Peru?
Díaz – In the last few years, five major production lines have concentrated more than 50% of the import value of Peruvian goods: petroleum and derivatives, mechanical machinery, electrical machinery and equipment, vehicles and plastic parts and products. Among agricultural products, we export cereals such as yellow corn, durum corn, wheat and rice mainly. We also import oils and petroleum products from Ecuador, plastics and pharmaceutical goods from Colombia.

AgriBrasilis – How does the impact of COVID-19 affect the trade between members?
Díaz – First, the Chinese economy was affected and with it the reduction of its imports, affecting mainly Peru and Bolivia. A second and important consideration was the policies followed by governments to tackle the pandemic. Through emergency actions and quarantines, a series of productive, commercial
and financial activities were suspended and restricted, affecting investments, employment and the population’s income.

The four countries of the Andean community have adopted serious fiscal measures, which have already compromised their public finances, largely due to the suspension of foreign trade between trading partners, as well as a large deficit in their working capital for the next agricultural season. Peru is already using the equivalent of one fifth of its GDP to cover expenses with health care and social prevention. The country is now the last of the bloc to finance plans for the gradual reactivation of the economy.

Finally, the situation is very unstable and the future scenarios are very different, according to the Ministry of Agriculture, there was a drop in Peruvian agricultural GDP and it will still fall by more than 5%. We must wait for the reactivation processes in the countries so that no further outbreaks occur. 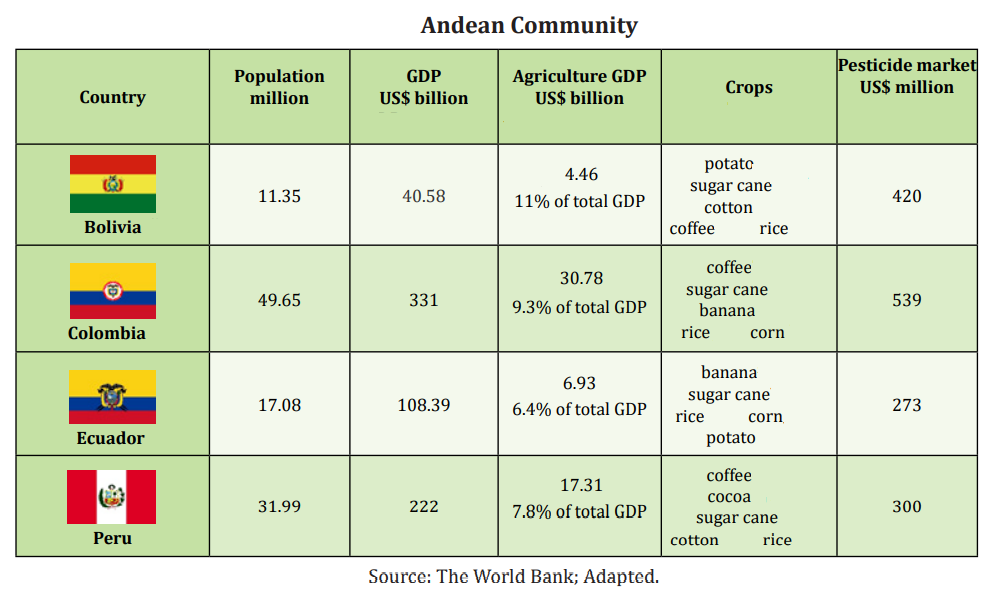