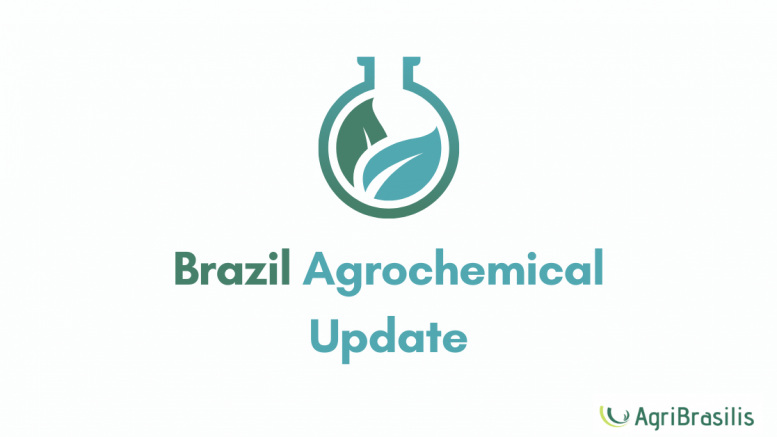 Information about pesticides approved in 2022

Grain farmers delay purchase of inputs, especially fertilizers, needed to start planting the 2023/24 season. Uncertainties are related to the successive price increases in the past two years. According to a survey from the Center for Advanced Studies in Applied Economics, fertilizer prices were the ones that most impacted the purchasing power of Brazilian farmers. Increase in cost of fertilizers was recorded from January 2021 to July 2022. (Cepea-USP)

Ministry of Agriculture informed that less than 10% of the samples collected in inspections of organic products in the State of São Paulo had presence of pesticides. In 2021 and 2022, 61 samples of organic food were collected in the state. Only six of them were in non-compliance with the legislation. Whenever there are collections, samples are analyzed in the Ministry’s own laboratories. (MAPA)

Grupo Central Campo inaugurated a foliar fertilizer industrial facility in the State of Minas Gerais, with an annual production capacity of 6 million liters and 7 thousand tonnes, with investment of US$ 1.71 million. Indústria Nacional de Tecnologia Química – INNTEQ, was inaugurated with a new business model, based on white labelling, in which the products in the company’s portfolio are packaged with a third-party brand, and also on the private label model, in which products are customized according to the needs of the trading partner. “Much more than products, we are a service company. We take the partner’s hand and help them create from scratch and manage their own brand of foliar fertilizer”, said Artur Barros, executive director of INNTEQ. (INNTEQ; Grupo Central Campo)

On 01/06/23 president Luiz Inácio Lula da Silva said “the force of law will prevail” over farmers who use prohibited pesticides, during the government’s first ministerial meeting. Lula stated that businessmen who produce with responsibility will be “greatly respected”. (Ministry of Agriculture)

PrimaSea, specialized in products for plant and animal nutrition, announced the acquisition of a vessel to optimize the maritime collection of Lithothamnium spp., a type of seaweed with more than 70 mineral and organic nutrients, and the company’s main raw material, used in animal feed and fertilizers. (PrimaSea)

Fertilizers arriving at the Port of Itaqui, State of Maranhão, are already being shipped by rail. The first rail route for the transportation of fertilizers from the Port started operating in November 2022, but gained strength this month, after the testing phase. According to the operations team, the railroad is already performing as planned for its first shipments, with 733 tonnes of cargo dispatched/hour. The system’s annual capacity is 1.5 million tonnes, but can be increased upon demand. (COPI; VLI)

State of Tocantins’s Agricultural Defense Agency warns about the mandatory annual re-licensing of commercial and industrial establishments dedicated to the selling, storage, application and production of agricultural products. It is expected the re-licensing of more than 600 establishments, that is mandatory for all companies that sell pesticides, seeds, vaccines and veterinary medication. (Adapec-TO)

In compliance with the court decision, Anvisa approves toxicological evaluation of the pesticide Fullguard, by Rainbow, based on carfentrazone-ethyl. (Anvisa)

According to an investigation by the Federal Police, public servants facilitate the illegal entry of pesticides and wines from Argentina. Almost all the incidents take place in regions bordering the neighboring country, in cities in the States of Paraná and Santa Catarina. While working at the inspection post located on the border with Argentina, employees facilitate the irregular entry of products into Brazil, including those whose importation is prohibited or depends on authorization from regulatory agencies. Police complied with four search and seizure warrants in the cities of Paraíso and São Miguel do Oeste, Santa Catarina, issued by the Federal Court in Chapecó, also in that State. (Federal police)

According to João César de Freitas, commercial director at Katrium Indústrias Químicas, a manufacturer of caustic potash (potassium hydroxide), the good prospects for the Brazilian grain harvest in 2023 represent a positive sign for the chemical industry. The Brazilian Institute of Geography and Statistics predicts the Brazilian grains, cereals and legumes harvest in 2023 should reach 293.6 million tonnes, a new record. (Katrium Chemical Industries; IBGE)

Agrogalaxy doubled their net revenue in the first nine months of 2022, compared to the same period of the previous year, that is attributed to the acquisitions of Agrocat and Ferrari Zagatto, in addition to greater volumes sold and higher prices. (Agrogalaxy)

National Association for the Diffusion of Fertilizers stated on 01/03/23 that fertilizer deliveries to the Brazilian market ended October 2022 at only 3.8 million tonnes, recording a reduction of 17.8% compared to the same period of 2021, when it reached 4 .7 million tonnes. From January and October 2022, the total was 33.96 million tonnes, with a reduction of 11.4% compared to 2021, when 38.33 million tonnes were recorded. “In 2022, there was an atypical scenario, with challenges related to geopolitical crises, but the Brazilian market continues to be supplied…”, explains Ricardo Tortorella, executive director of ANDA. (ANDA)

On 01/05/23, Administrative Council for Economic Defense – CADE approved the acquisition of Stoller by Corteva. According to CADE’s statement, there are “horizontal overlaps in the segments of biological products, adjuvants and oils”, and a more careful evaluation of the process was necessary. Regarding the biological products sector, the statement determines that “the definition of the relevant market was left open in the cases previously analyzed by CADE, with greater focus being given to the commercialization and distribution of these products”. Overlap between the companies would be limited to nitrogen fixers and bionematicides. “The Operation does not have the power to cause damage to the competitive environment, falling within the hypothesis of summary procedure of Article 8, item III, of Resolution No. 33/22”, according to the statement. (Administrative Council for Economic Defense; Corteva; Stoller)

Corteva Agriscience announces Ana Cerasoli as the company’s new president for Brazil and Paraguay as of February 1, 2023. Cerasoli will replace Roberto Hun. Hun was appointed Stoller’s global integration leader. On 11/29/22, Corteva announced a definitive agreement for the acquisition of Stoller. (Corteva; Stoller)

Unigel renewed certification from Inmetro for sales of ARLA 32, a compound that reduces pollutant emissions from fossil fuels. First certification took place in 2021, when the company leased a nitrogen fertilizer plant in Camaçari, State of Bahia. According to Paulo Arnaez, Unigel Agro’s commercial director, the company was also included in the Manufacturer category. “In 2021, we were authorized to distribute and sell the existing input in the fertilizer plant. Last year, we worked hard with all the stakeholders involved and ensured the regulation of the production of ARLA 32 by Unigel, that is an extremely strategic product for our portfolio”, he explains. (Unigel Agro)

IBAMA's deliberations in the area of pesticide registration