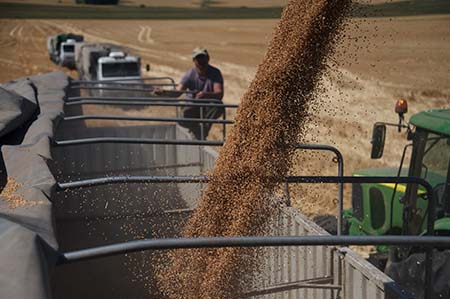 Argentina is an important wheat exporter. However, the drought during the 2020/2021 harvest caused losses close to 10% of the total production.

Guillermo Alonso, technical assessor of sales and after-sales of seeds; Estebán Lopez, general production coordinator; Germán Iturriza, exports manager and Carlos de la Cruz, sales manager of Molinos Canepa, part of the Los Grobos Group, one of the main companies of wheat production and processing from Argentina, in an exclusive interview to AgriBrasilis. 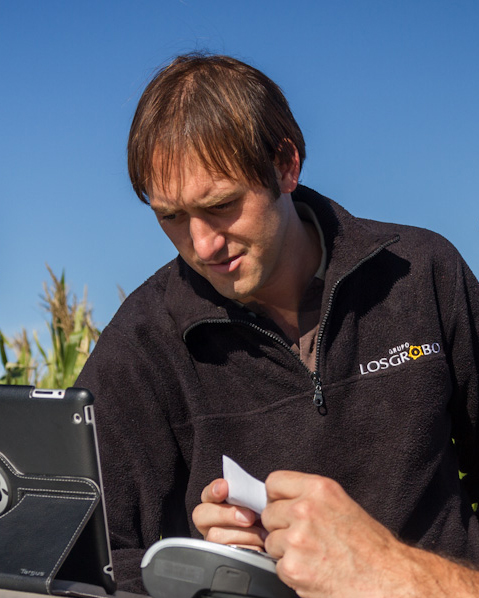 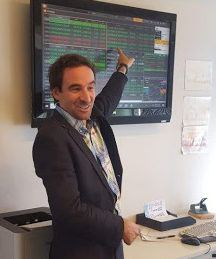 Guillermo Alonso, technical assessor of sales and after-sales of seeds

AgriBrasilis – Argentina is a traditional wheat exporter and the biggest producer in Latin America. What are the main destinations of such exports?

Los Grobo – In 2020, according to data of the National Institute of Statistics and Census (Indec), the 5 main destinations of Argentinean exports were Brazil, Indonesia, Bangladesh, Kenya and Thailalnd.

AgriBrasilis – Which are Los Grobos’ main activities in the Argentinean wheat supply chain?

Los Grobo – Seed multiplication, with 180,000 certified bags. Los Grobo Agropecuary is one of the main certified seed multipliers in the Argentinean wheat supply chain. With processing in their own factories (Tandil, San Miguel del Monte and Jesus Maria) and third-party factories with over 40 producers/cooperating partners. We produce seeds of the main genetic companies of the country (Nidera, Don Mario, Bioceres, Syngenta/Buck, among others). The next campaign should come to the market with a licensed variety and with an own brand.

Besides that, over this last campaign the company sowed about 42,100 hectares of wheat (which represents 0.64% of the 6.5 million hectares all over the country), in 6 productive provinces of Argentina, with a bigger proportion on the Province of Buenos Aires, participating in 50% of it, this area is the origin of about 145,000 tons of grains (what represents 0.85% of the 17 million tons harvested), from which 72,500 tons are commercialized, either for flour grinding, where the flour is processed and made, or for export through the ports of Rosário, Quequén or Bahía Blanca.

In this sense, the cultivation chain is integrated since primary production, going through management of these tons of product with logistics services with shipping of their own and/or hired, intermediary storage services, up to reaching destination at grinding industries, or exports. What goes to the grinding industry and is sold as flour also has the commercialization of the finished product and delivery logistics.

According to the grains bag, during this harvest wheat had a decrease of roughly 10% when compared to the last harvest (2019/2020). We left a 18.8 million tons harvest to end this year last cycle with 17 million tons.

AgriBrasilis – Is there a possibility to increase the area and/or the productivity of the crop?

Los Grobo – Yes, of course; besides the current change in the agricultural frontier for beyond the600 mm isohyet due to the better agricultural practices and to the arrival of new technologies, especially to the Central and North region of the country, where wheat is a purely defensive crop. In many environments the crop is sown as a low technology coverage and, if the year is climatic, it is harvested with incomes lower than 1.5 tons in most cases. The irrigated agricultural area should also increase expressively in the country over the next years, what could be important to wheat cultivation. Besides that, the arrival of the drought gene HB4 of Bioceres could expand both this frontier and the crop yield in environments with elevated hydric stress.

AgriBrasilis – Which are the main phytosanitary, logistical, credit related problems linked to the productive chain of this cereal?

Los Grobo – Phytosanity is of little relevance. Because today is known where performance and effective control are lost, and under well studied limit guidelines of economical damage, the main plagues and diseases are effectively controlled.

Logistics, yes. Because it is far from the ports. We should move to a system of traceability classification directly from the field to improve shipments and quality, and with this have a better arrival at the ports and better defend origin grains’ prices. There are areas of the country that should strive to find specific qualities for the different markets, plants and other areas that only need to worry with increasing the yield potential. The great distances from the ports, especially for merchandise from the Northeast and Northwest of the country, is another point to be improved. Obviously bringing a US$ 160 to the Rosário port by truck means losing competitiveness, and we continue to spend on technologies in these areas.

Credit, without getting too deep on the subject, is an inherent deficit to all the Argentinean agriculture.

AgriBrasilis – In the domestic consumption, what are the impacts caused by the pandemics?

Los Grobo – Initially the pandemics hit the domestic consumption of flour, with the decrease of people’s traffic for the bakeries. A drastic decline of the consumption on these channels, which slowly retrieved month after month, as the stores started back on business. First the bakeries itself, then the bakeries that supply bars and restaurants.

The opposite happened to the consumption of the kilogram of flour. The more at home time people had, the more they spent cooking and, therefore, that encouraged them to bake farinaceous goods more than the usual, buying the product in supermarkets, wholesale markets and warehouses. As people went back to the normality regarding work tasks, this consumption decreased.

AgriBrasilis – Are there technological innovations expectations regarding yield production?

Los Grobo – Yes, to the Biocere drought gene mentioned above, HB4, which should improve the drought resistance capacity of the plant, adding to a better production. We shall add many improvements plans of what is commercial, industrial and bakery quality (gluten, gliadin and high molecular weight glutenin). We are also working in genes that confers the plant tolerance to Fusarium, one of the main wheat diseases and that can cause 30% yield losses. There are other genes with more nutritional properties that are also quite advanced. Transgenic and mutagenic events with tolerance to different herbicides. Strands with higher tolerance to frost in grass and grains are being selected. Which means the expectations are big towards innovations that could improve yield and quality of the wheat produced in the country.

Vertical Integration is a Necessity in Table Citrus Cultivation