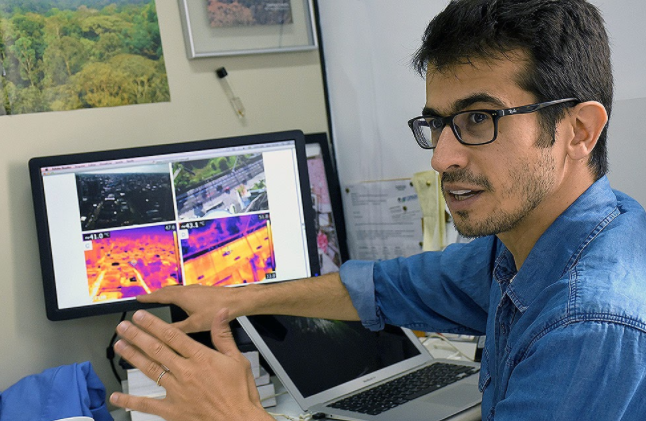 Data from the Real Time Deforestation Detection System (Deter) from the National Institute for Space Research (INPE) show that deforestation in Brazil has recorded devastation of 9,200 km² in the last 12 months – an area equivalent to six times the size of the municipality of São Paulo, an increase of 34% compared to the same period last year with 6,800 km² (August 2018 to July 2019), which had already represented an increase of 50% in relation to the previous period ( August 2017 to July 2018). This factor leads to increased temperatures and changes in the rainfall regime, causing local and continental climate changes that compromise agricultural practices, in addition to putting at risk the entire biological balance of the planet.

Together, climate change is already a reality on the planet, and directly affects agricultural practices. AgriBrasilis interviewed David Lapola to explain the relationship between the current climate emergency and agriculture.

David Montenegro Lapola has a degree in Ecology from the Universidade Estadual Paulista (UNESP), a master’s degree in Meteorology from the National Institute for Space Research (INPE), a PhD in Modeling the Earth System from the University of Kassel (Germany), and has a post-doctorate from INPE. Lapola currently chairs the Amazon-FACE program scientific committee, and is a researcher at the Center for Meteorological and Climate Research Applied to Agriculture (CEPAGRI) at the State University of Campinas (UNICAMP).

AgriBrasilis – What is the difference between the terms of climate variability and climate change?
David Lapola – Climatic variability is the normal variation that the climate has. For example, within a period of thirty years there may be drier years, others more rainy. Climate changes are configured when precisely this variability begins to change, as with the occurrence of more dry years and more rainy years than normal.
Normal climatic variability is caused by changes in climatic variables such as winds and cloudiness and, in most cases, affect specific locations or regions. Global climate change affects the entire planet and is caused by emissions of greenhouse gases through the burning of fossil fuels and deforestation.

AgriBrasilis – What can global warming and climate change bring about losses or benefits in agricultural activity?
David Lapola – Losses will arise if the production chain does not adapt, in the form of increasingly frequent crop failures, whether due to poor plant development or the spread of diseases. There are several recent examples of this in Brazil. One of them was the failure of the 2010-2011 sugarcane harvest due to climatic adversities that forced the sector to import large quantities of ethanol to meet the country’s demand at that time. Another one was the drastic fall in the Brazil nut harvest in 2017 due to a severe drought in the central Amazon, which caused a significant increase in the price of the nut.

The entire agricultural sector will have to adapt. Those who start doing so will already feel less of the impact of these losses if they see this adaptation as an investment. Large-scale agriculture will have to invest heavily in the selection of varieties more adapted to these climate changes. And this genetic selection is costly, in terms of time and resources, but research indicates that this investment would be less than the losses arising from an inaction in the sector.

Small producers, on the other hand, may be more impacted by having, in relative terms, less access to credit and insurance. But on the other hand, the diversity of varieties (for example caboclas) used by small producers can protect them in extreme climates. Benefits will be few: It is possible that the climate will be more favorable for a few crops. There is also the myth that the increase in atmospheric carbon dioxide (CO²) (which is one of the main greenhouse gases) is beneficial for agriculture. In fact, this increase can help plants reach maturity more quickly, but in addition to the climate changes that the increase in carbon dioxide brings, evidence indicates that the nutritional content of fruits and seeds worsens under high CO².

AgriBrasilis – In the future, what are the worst scenarios expected for agriculture due to the effects of climate change?

David Lapola – Heating at an average of 6ºC and a reduction of up to 50% of rainfall in some regions of Brazil, and in others an increase in total precipitation, which is also not necessarily good for most crops.

AgriBrasilis – Are there significant data on losses in agriculture with climate change as a cause, in the past and future projections?

David Lapola – There are few studies that systematize agricultural losses in Brazil related strictly to changes or climatic extremes. It is a pity as this would help us to understand both the level of resilience of Brazilian agriculture and the plausibility of future projections.

On the other hand, studies with future projections abound. In general, they show this drop in productivity and loss of area suitable for planting most Brazilian crops.

AgriBrasilis – How is Brazilian research advancing towards agriculture adapted to the climate change scenario?

David Lapola – Given the ineffectiveness of global climate change mitigation mechanisms, the importance of adapting agriculture to these climate changes has become clear in recent years. In the coming years I see that Brazilian science will contribute a lot in this field. And in a general way in the construction of an agriculture that observes the precepts of sustainable development, including also the controversial relationship between Brazilian agriculture and deforestation that generates greenhouse gases, aiming even to conquer more demanding international and domestic markets that care about the way of production.

AgriBrasilis – What is Agricultural Climate Risk Zoning and how can it assist agricultural practices in a threatened future?

David Lapola – ACRZ, coordinated by EMBRAPA with the participation of several partners, uses the climatic limits defined for each type of crop commonly planted in Brazil and spatializes them on a map according to the climate projection for the coming year. This helps the producer to plan and also makes rural insurance cheaper, the hiring of which is subject to compliance with the ACRZ by the producer.

In a 2008 study led by EMBRAPA and UNICAMP, these current climatic limits for Brazilian crops were applied to long-term climate change scenarios for the coming decades. The result was a reduction in the area suitable for growing the vast majority of the country’s plantations. This gives us a first measure of the degree of adaptation that would be necessary for these crops.

AgriBrasilis – What are the perspectives for agriculture based on the research of you and your team, given the scenario?

David Lapola – Understand through physiological models how plant productivity responds to long-term climate changes and identify which key characteristics of these crops could be selected genetically in order to adapt the country’s agriculture (and how much it would cost). The exploration of future synergy scenarios between agricultural production and environmental conservation is also a priority for the coming years in my research group.