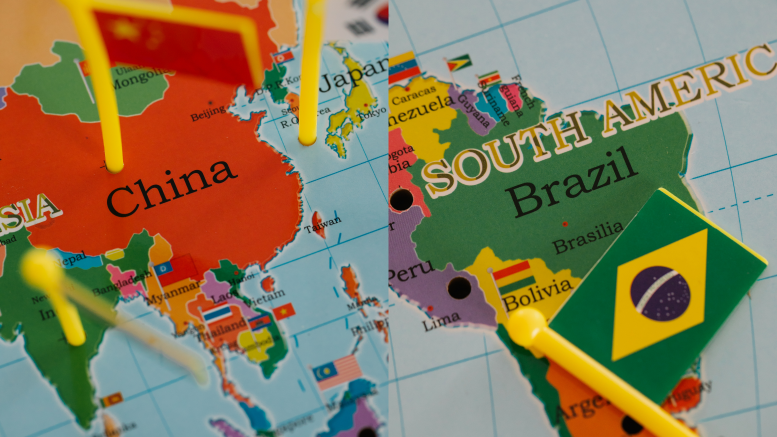 “Ideally, Brazil would develop its own food brands in the agricultural sector, so that we could be a reference around the world, as well as the foreign brands that sell our coffee, our juices…” Larissa Wachholz is a partner in Vallya Participações and executive director in Vallya Agro. She is a specialist in the Chinese market, having been a special advisor to the Minister of Agriculture, Livestock and Supply of Brazil, Tereza Cristina, from 2019 to 2021.

Wachholz has a degree in international affairs from Estácio de Sá University and a master’s degree in Contemporary Chinese studies from Renmin University of China.

AgriBrasilis – How is the relationship between Brazil and the importers of agricultural commodities? Are those partnerships solid or occasional?

Larissa Wachholz – The partnerships that Brazil has consolidated with its importers of agricultural commodities are solid.

No country chooses to import agricultural commodities unless it is necessary. China chose to import soybeans as grain and Brazil has become a major supplier. China wouldn’t depend on this to feed its animals if it wasn’t necessary, but planting soybeans in China would have consequences, such as using limited water resources and the space for other products that the country considers as priority, such as wheat, rice and corn.

It is true that countries can buy from a group of suppliers, but not many have the agricultural potential and competitiveness of Brazil. In the case of commodities, buyers want to buy from us.

AgriBrasilis – China is Brazil’s biggest buyer. Are there plans for Brazil to reduce this “dependence”? What is the role of government and the private sector?

Larissa Wachholz – China purchases approximately 30% of Brazilian agricultural exports, being our most important buyer. This is due to the circumstances that provided China’s rapid economic growth.

China’s economic reform caused rapid urbanization and income growth. The middle class started to consume more meat, for example. Brazil has positioned itself as a supplier of the main agricultural commodities used for animal feed in China, mainly soybeans.

Recently, because of factors such as the African swine fever, that reduced approximately 50% of the Chinese swine herd, Brazil has increased its exports of animal protein to the country.

Brazil and China’s agricultural trade is greater than the GDP of many countries, but the excessive Brazilian focus on soybeans and in China is an issue. New products, trade and sanitary agreements should be developed with other countries.

The government’s role is to negotiate sanitary protocols that allow the export of agricultural products, in addition to identifying chains with exportable surplus. The next step must come from the private sector, that actually generates export flows and must carry out the work of promoting products and organizing production chains.

Asia is the region with the greatest potential for growth in the consumption of agricultural products with higher added value, but Brazilian companies are still absent from the continent. Representation close to the consumer is necessary, because they know little about Brazil and the products we can offer.

It is essential to maintain local offices that have contact with the press and with large local buyers. That’s what our competitors do.

AgriBrasilis – Can it be said that purchasers of agricultural commodities from Brazil do not have other supply alternatives? What countries could occupy this position?

Larissa Wachholz – Exporting agricultural commodities with Brazilian competitiveness is not easy. We produce on a large scale and with good safety practices. But it would be an exaggeration to say that purchasers have no other alternatives.

Just as Brazil developed its potential in the Midwest region in the 1960s and 1970s, other countries could take similar actions. We are not in an absolute comfort zone, without competition.

AgriBrasilis – Brazil is very dependent on imported agricultural inputs, such as fertilizers and pesticides. As for China, is there any proposal of mutual benefit in relation to the supply of pesticides and the export of agricultural products?

Larissa Wachholz – Russia is the biggest supplier of fertilizers to Brazil. China is our supplier of pesticides. This is a vulnerability of our potential as an agricultural producer.

Mutual benefit already exists: China manufactures at a low cost and this benefits us. China has a greater production capacity than the United States, Germany and Japan combined. This makes China competitive in the manufacturing of chemical products, such as the pesticides exported to Brazil.

There is a movement in China to review the rules and conditions of the chemical industry. There is an intention to allocate chemical parks further away from cities, in the less populated western region. It seeks to raise environmental and occupational safety standards. These are actions demanded by Chinese society and that will make chemical manufacturing more expensive.

We got used to cheap and competitive products, but that are not always adequate from the point of view of environmental and safety regulations. This has been under review for a few years now and it’s a trend that’s here to stay.

China is the most interested in the production of agricultural inputs at a low cost, as it is the largest agricultural producer in the world and a major consumer. Products are exported, but first they must meet domestic demand.

Destination of Brazilian exports in 2020, represented by US$. (SOURCE: Observatório de Complexidade Econômica)

AgriBrasilis – How did the pandemic change trade relations in the international market?

Larissa Wachholz – The pandemic aroused protectionism. Some countries started not allowing the export of commonly exported products for fear of shortages.

There is an ongoing review of where to locate supply chains for different industries. Some specialists consider that there will be regionalization of the chains with a focus on local production. Time will tell to what extent the chains restructure and which ones will remain globalized.

Brazil, especially regarding agricultural trade, remained open, producing, exporting and fulfilling international contracts. Its agribusiness is competitive and it was possible to maintain domestic supply.

AgriBrasilis – What are Brazil’s strategies to attract investments for agribusiness? Which countries would be able to invest in this market?

Larissa Wachholz – It is strategic for Brazil to attract foreign investment to agribusiness, that is very capital intensive. Data from Vallya Agro show that approximately US$ 139 billion are necessary to finance Brazilian agriculture each year. The Brazilian system uses creativity to raise funds for each harvest, that ends up being mostly comprised of money from the private sector.

Only 30% of the resources come from Plano Safra, the government’s agribusiness financing plan, while the other 70% are resources from the private sector, from individuals, companies or the private financial system. There is room to improve the conditions of access to credit and make them more competitive. The path of foreign capital is one of these possibilities. There are instruments today, such as Fiagro (Investment Funds in Agro-Industrial Production Chains, created by the Brazilian Government), that allow this to be done with security and governance.

One advantage of attracting investments is the reduction in the cost of credit for agribusiness, a highly leveraged sector, with direct consequences for reducing costs of agricultural production. This year we are talking about the most expensive farming season in history, so it makes sense to think about instruments, mechanisms and strategies for this reduction. In addition, attracting foreign investment would be essential to diversifying and adding value to the Brazilian export agenda.

Adding value requires capital. There are foreign markets interested in purchasing higher value-added agricultural products. They are potential investors in value-adding chains and processes. Countries that are suitable for investing are those with which our agribusiness often interacts. China should certainly be a priority target.

European countries could also play the role of investors. They are very concerned about the sustainability of production chains. It is interesting to be able to develop projects focused on sustainability with European companies as investors and promoters of good practices. Projects that encourage low-carbon agriculture, for example.

AgriBrasilis – What would be the ideal trade relations with importing countries? What would it take to reach this?

Larissa Wachholz – In the case of Brazil, ideal relationships would be those where we could export agricultural products with greater added value and that communicate in their brands the idea of Brazil as a supplier of safe food from the sanitary point of view.

Ideally, Brazil would develop its own food brands in the agricultural sector, so that we could be a world reference like the foreign brands that sell our coffee, juices and chocolate made from our cocoa, among other examples.

There is a lack of a strategy for creating and promoting brands abroad. This added value requires investments and is not a cheap process. You must have a globalized view and the desire to be abroad.

The Brazilian market is very large. It is a market of scale. For many brands it makes more sense to dedicate resources to serving the Brazilian consumer. But it is necessary to have a strategy of being abroad, willing to please foreign consumers and show them the quality of the product we have in Brazil.