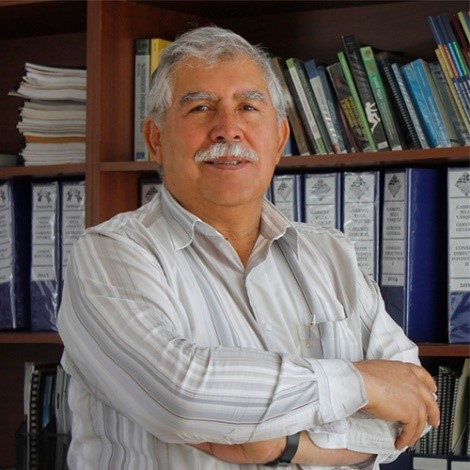 Rodolfo Marquina Bernedo is the ex-president of Descosur, an agronomist graduated in the Peru National University of Engineering and a specialist in rural development in the context of Andean peasant economies and small-scale agriculture.
Bernedo coordinates the implementation of Descosur’s project Improved Techniques for Reproduction, Recovery and Management of Natural Pastures for peasant communities that breed llamas and alpacas – Proandino II and participates in the expansion of rural microfinance services.
Descosur is a non-profit organization that works for the economic development of southern Peru.

AgriBrasilis – What is the role of Descosur in promoting sustainable development and what activities does it carry out?
Rodolfo Bernedo – Descosur operates in southern Peru, in the regions of Arequipa, Puno, Moquegua and southern Ayacucho, mainly in the rural areas of the inter-Andean valleys and the high Andean space, which presents the greatest challenges for sustainable development and social inclusion.
We work with small farmers and family farmers. We identify the relevant production chains in the territory and their limitations, so we can formulate projects to improve the quality of life of populations, with a focus on environmental and social sustainability, interculturality and gender equality.

AgriBrasilis – How is the entity related to alpacas breeding in Peru?
Rodolfo Bernedo – The commitment to the development of South American camelids responds to a long-term institutional vision with the objective of generating changes in the economic, social and political spheres of local communities. We do this through capacity building, technology transfer and support for organizational and institutional management, which are vital elements for rural development.
Descosur began its interventions in 1985, in the province of Caylloma, Arequipa, in the high Andean region, located 3,800 meters above sea level, where the most important economic activity is the rearing of alpacas and llamas. The development of the activity is challenging due to the difficult conditions of the territory and the vulnerability of the farmers families.

AgriBrasilis – What is the socioeconomic importance of alpacas? What does the activity represent for Andean communities?
Rodolfo Bernedo – Peru has 80% of the world’s alpacas, located mainly in the territory of the Andes Mountains. In Peru, 82,000 families dedicate themselves to this activity, managing 3.8 million alpacas and 890,000 llamas, in a territory of 15 million hectares of natural pastures.
The territory where the alpacas are raised is important because it is where the hydrographic basins that provide the water resources that sustain the life of cities in the middle and lower areas of the basin originates. That’s why we call the families that manage the herds of alpacas and llamas “the guardians of the high mountains”.
The contribution of camelid breeders to environmental sustainability has not been sufficiently recognized in public policies and, recently, legislation exists to establish payment mechanisms for environmental services, which will provide resources for the recovery and consolidation of pastures. 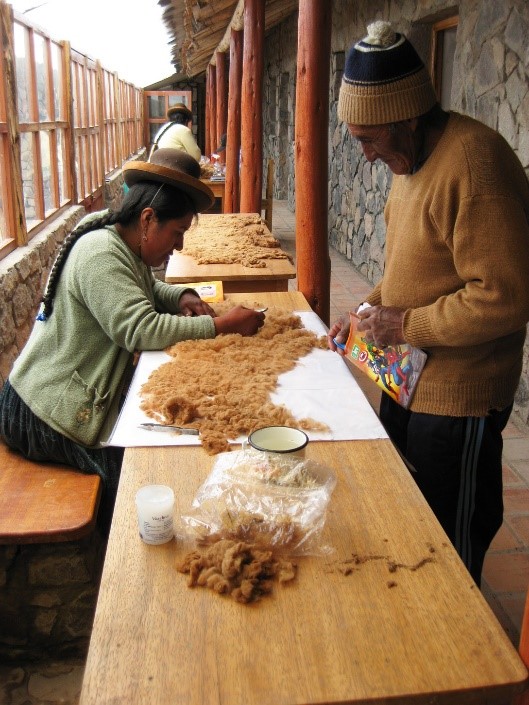 AgriBrasilis – What are the main aspects of alpaca breeding and what is the profile of these animals’ breeder?
Rodolfo Bernedo – Alpaca’s main product is fiber, for the international high fashion market. The national production is 5 thousand tonnes per year, which means an income for the breeders of US$ 40 million. The second product is meat, estimated at 12 thousand tonnes per year, with a revenue of US$ 32 million.
The fiber is exported with different processes, from carded fiber tops (carded fiber is the one that went through a preparation and separation process for spinning) and combed, which are the largest proportion of exports, to yarns, flat fabrics and confections. In 2019, exports totaled US$ 163 million. Due to the pandemics, in 2020 exports dropped to US$ 114 million, but currently we can see a recovery.
A key aspect of production is the management and conservation of natural grasslands and wetlands to increase their grazing support capacity.
The grazing space, from 3,800 to 4,800 meters above sea level, is composed of fragile areas that have increased their vulnerability due to the effects of climate change, reduction of glaciers and rainfall.
Breeders have implemented measures to manage water resources from the rains, through the strategy of planting and capturing water, building rustic reservoirs and channels for the recovery of springs and mangroves, improving the quality of pastures. In addition, fertilization and propagation practices of native grasses are carried out. This means a fundamental change, moving from a traditional grazing activity to an agricultural activity, incorporating management actions of water resources, soils and pastures. 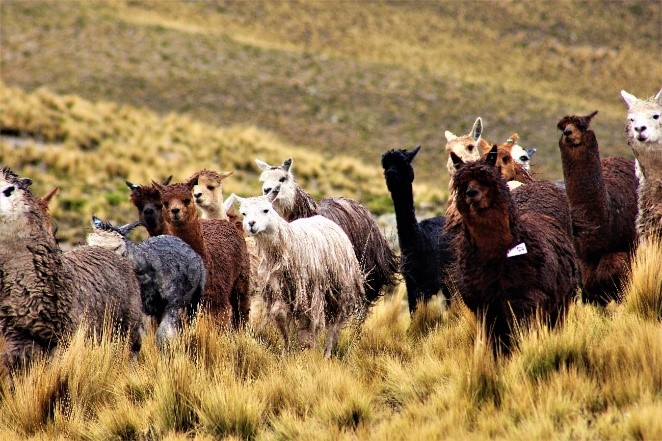 AgriBrasilis – What measures are necessary to care for the reproduction of these animals?
Rodolfo Bernedo – Since the time of colonization, the breeding of alpacas was confined to the marginal spaces and the highlands of the mountains, where the joint grazing of male and female animals produced mixed animals between specimens of different colors, producing alpacas with varied wool colors.
The need of the international market demands the production of alpacas with wool of a single color, mainly white, due to the advantages for processing and textile dyeing. Another important condition for the quality and competitiveness of alpaca fiber is fineness.
Since the middle of the last century, efforts have been made to establish herd management programs aimed at improving fiber quality.
Controlled breeding must replace the traditional one, which implies a great effort for breeders, as it requires separate grazing of males and females, the selection and identification of males and females from the herd, disposal of animals with genetic defects and stains on the wool to arrange the mating between the specimens according to their quality and color.
These techniques have resulted in improved infrastructure for animal management, such as building sheds so females can sleep with their calves. The breeding families have these facilities, which ended up reducing the mortality of the offspring. Another example of facilities built by breeders to improve herds are the rustic constructions called mating modules.

AgriBrasilis – What are the benefits of genetic improvement in camelids and what activities does Descosur carry out in this context?
Rodolfo Bernedo – Genetic improvement in alpacas aims to improve fiber quality, especially fineness. In this sense, Descosur implements the Genetic Improvement Program, applying a selection index, based on three objective factors: fiber diameter at first shear (greater weight), coefficient of variability that measures the uniformity of the wool and the weight of the wool.
We work in the training of breeders and provide technical assistance in the selection and identification of herds, in the implementation of controlled records of mating, production and affiliation, which provides essential information for genetic evaluation. The effort of this activity generates a certain specialization among breeders who achieve recognition as breeder suppliers.
As an effect of years of work, an improvement in the proportion of superior fiber quality is reported in the material collection campaigns.

AgriBrasilis – Could you comment on the Salinas and Aguada Blanca Reserve Conservation Project?
Rodolfo Bernedo – Since 2007, Descosur has had a contract with the government of Peru, through the National Service of Natural Areas Protected by the State, for the administration of the Salinas Aguada Blanca National Reserve, which comprises an area of 366,000 hectares, where the Chili River basin springs, vital for Arequipa, providing water resources for human consumption, agriculture, power generation and mining.
We promote the regulation of compensation for environmental services to ensure that water users in the region, such as the population and companies, are allocated in the execution of projects to strengthen and restore natural pastures. We aim to reduce erosion, increase vegetation cover and improve pasture capacity in the upper basin.
Our work consists of the conservation of wetlands, including two Ramsar sites (Wetlands of International Importance, established by an intergovernmental conservation treaty), the conservation of the vicuña, which is the animal symbol of Peru, and of all wildlife.
We also promote initiatives to improve the settled population of the place, approximately 1,200 families. 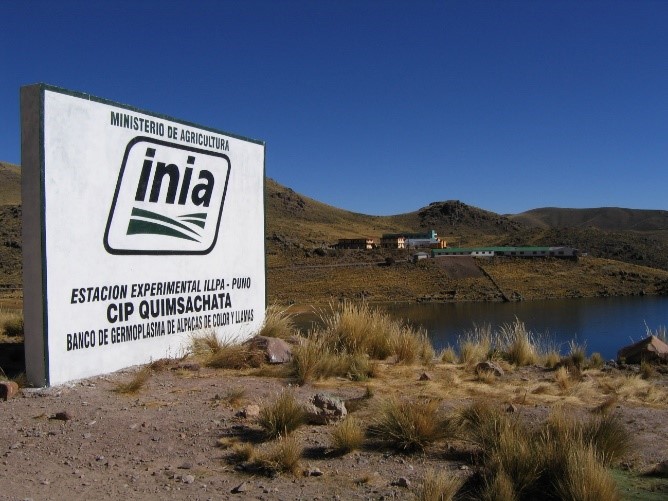 CIP Quimsachata, where the Dermplasm Bank for colored alpacas is located

According to Oscar Cardenas Minaya, national coordinator of the Camelid Research Program based at the Illpa-Puno Experimental Station, of the National Institute for Agrarian Innovation – INIA, the conservation of colored alpacas genes is carried out from the colored alpaca germplasm bank, with a population of 1,600 alpacas of different colors such as LF, brown, black, gray, api, among others.
The colored alpacas in Peru have been gradually decreasing because of the industry’s preference for white fiber. The colored alpacas currently represent a population of less than 14% of the total.
According to Minaya, the main camelids in Peru are the alpaca, the llama and the vicuña. There are two breeds of alpacas: Suri and Huacaya.
The Suri alpaca has long fibers forming curls that fall down the sides of the body, giving the animal an angular appearance. On the other hand, the Huacaya alpaca has a wool with fibers that grow perpendicular to the body, with shorter fibers, giving the animal a more voluminous appearance.