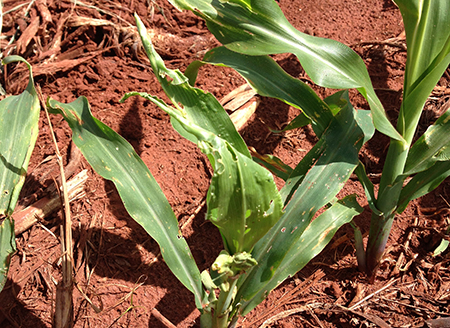 Losses between 10% to 25%, and even death of plants in severe attacks.

Green-belly stink bug (Diceraeus melacanthus) attacks corn in its early stages, causing formation problems such as tillering and unproductiveness. All regions in Mato Grosso had the presence of bug populations in the last two harvests, resulting in the increase of insecticides application and even losses where management wasn’t done correctly.

AgriBrasilis – How is the action of green-belly stink bugs in the plant and what are the damages caused?

Lucia Vivan – Adults and nymphs of  Diceraeus melacanthus (green-belly stink bugs) feed from the basis of corn seedlings injecting the stylets through the sheath to the inner leaves, causing a lesion that is visually perceived after the expansion of these leaves. This attack occurs few days after the emergence of corn plants and might cause the death of the seedling or the apical bud, which will result in the tillering of this plant and its unproductiveness. Some leaves of the whorl are unable to unwind and have a wrapped appearance with yellowish leaves.

Damages vary from 10% to 25% or even death of plants in severe attacks.

AgriBrasilis – Is there an estimate of the affected area in Mato Grosso?

Lucia Vivan – In the last two harvests all the corn producing regions had the presence of green-belly stink bug populations, and in some regions, where there were high populations and inefficient management  there were significant losses.

AgriBrasilis – What other crops are affected?

Lucia Vivan – The green-belly stink bug is a polyphagous insect, therefore surviving in different crops, cover crops used in off-season, as well as in most weeds. Soybean specially is a host where this insect develops and increase its population to later attack corn areas.

AgriBrasilis – What are the methods of control and management?

Lucia Vivan –  Control must be done with the use of seed treatment with neonicotinoid products and applications immediately after emergence 3 to 5 days after planting and again 7 to 10 days after planting. Damage can be caused by the bug until level V5 of the plant. Once the plant has stem thickening greater than 1 cm, damage is smaller.

The management of stink bug in production systems must control its population throughout the year. Weeds might favor the presence of this pest, offering food and a place for oviposition, thus fallow areas are likely to maintain this specie. Before planting soybeans it is important to evaluate the straw and verify the insect’s presence, pre-planting desiccation might be an option, and also treating seeds targeting the bug in soybean crop.

During the development of soybean crops, it is important to evaluate green-belly stink bug populations, mainly if the next crop will be corn. However, this specie stays more often on straw, making its monitoring more difficult.

Before planting corn, bug population on straw must also be monitored, and an application right after planting corn crops could be done.

AgriBrasilis – Has the amount of insecticides applied to control this pest risen significantly?

Lucia Vivan – Yes, in the las years it has been done a greater number of applications aiming this pest.

In most areas, it is done 3 to 4 applications, however damage still happens, due to the high presence of populations, which follow from the absence of control in the production system, permanence of weeds and volunteer corn plants.

AgriBrasilis – What are the reasons for this infestation outbreak?

Lucia Vivan – Today, production systems enable the permanence of the insect in the areas. There is intensification of corn crops, mainly second harvest, crop rotation and succession has been modified regarding composition, abundance and adaptation capability of different pest species. These changes might have triggered the population growth of some pest species such as the stink bug Diceraeus melacanthus.  Areas with remaining weeds and volunteer corn plants also allow the permanence and growth of this specie.