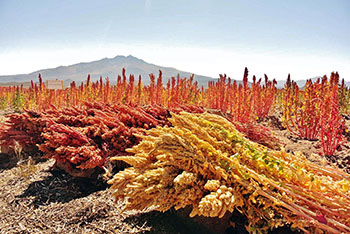 Quinoa considered by FAO a super food due to its rich nutritional value. 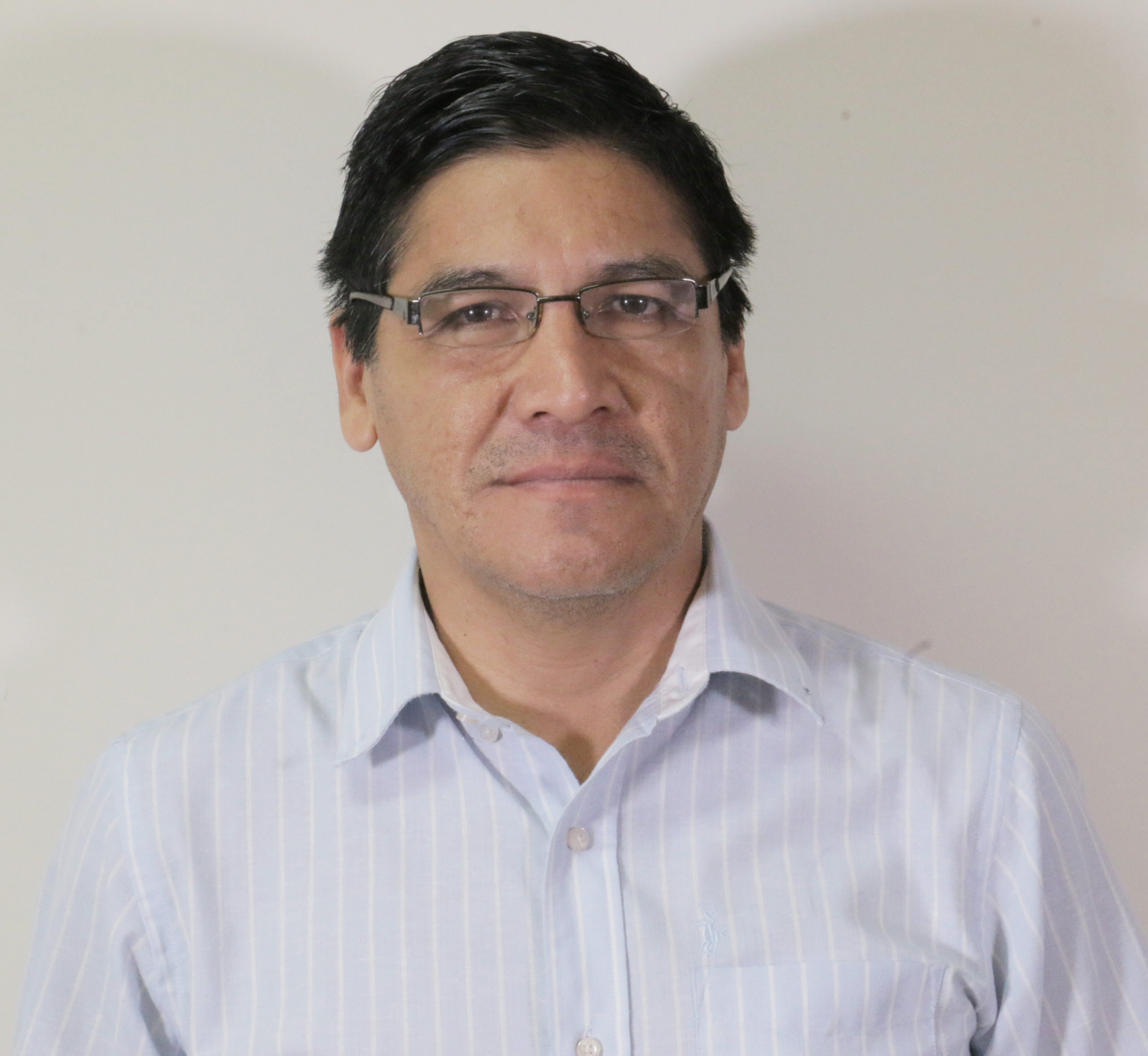 In this following article written for AgriBrasilis by Waldemar Mercado, a professor at the National Agricultural University of La Molina, in Lima, Peru. With a PhD in Production Engineering and with a master’s degree in Agricultural Development in Planning and Policy in Latin America and the Caribbean, the economist has both academic and research experience in agricultural trade, technological forecasting management of academic programs and agricultural economics.

Due to quinoa’s high nutritional value, do United Nations declared 2013 as the “International Year of Quinoa” (IYQ), to promote its cultivation and its consumption as an alternative for the strengthening of the global food security. according to FAOSTAT, in 2019 Peru was the 1st producer in the world, with over 55% of the total then believe it was second with 41% of the total.

Quinoa was in fourth place in the ranking of nontraditional agricultural exports of 2014 and 2015, Peru became the world leader of the market. During the period from 2010 to 2020, the volume of exports increased at 27.5% per year, the FOB value registered 35.6% revenues per year and the FOB values of 19.7% per year (table one). the correlation between exports (tons) and total production were of +0.64, and the FOB price with the producer price of +0.99, influencing the market to the internal variables.

The decrease in quinoa prices after the IYQ, due to excessive production and inadequate productive practices, such as the lack of crop rotation in the shore, which increased the occurrence of pests, causing the US to return some containers by considering them of poor quality. 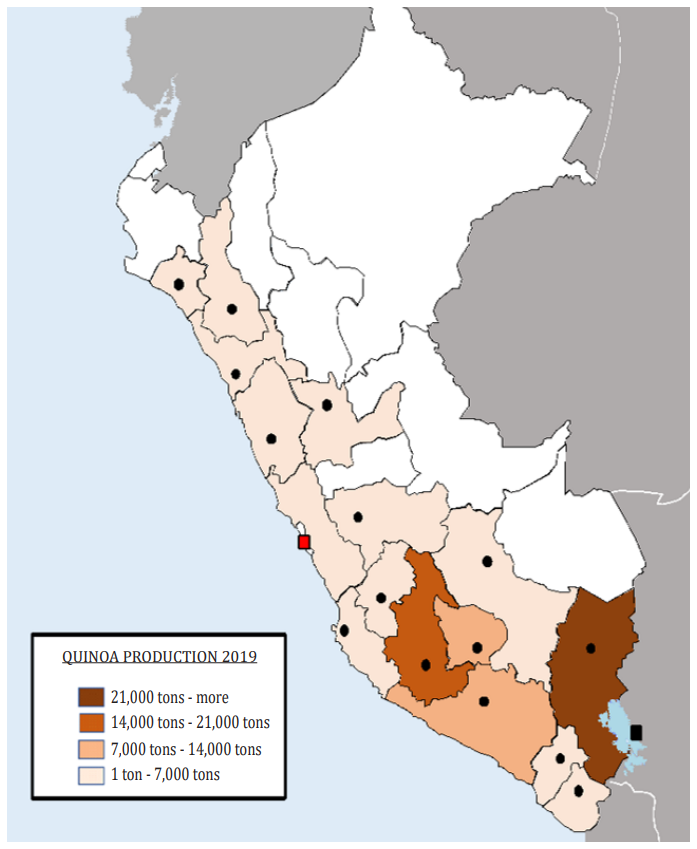 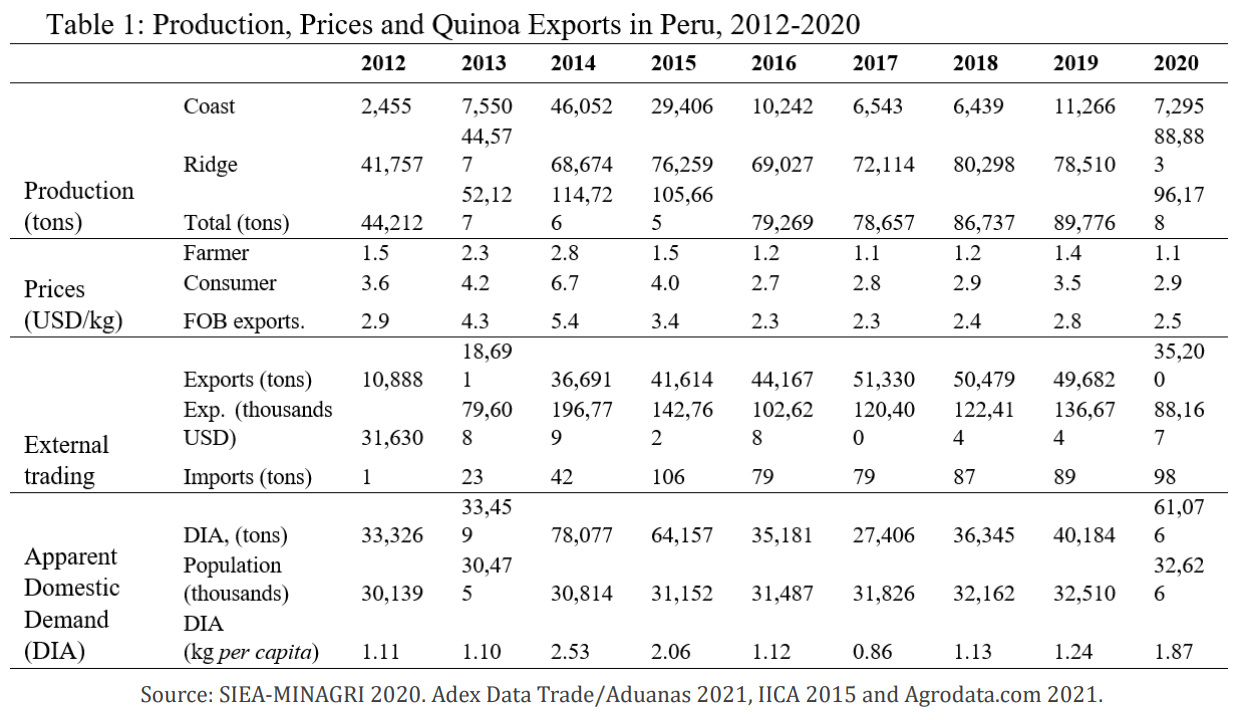 Quinoa exports in FOB value in 2020 were white, red, black, tricolor quinoa, dry bulk grains, conventional (79%), organic (19%) and with some transformation (2%), as a gelatinized quinoa, in powder, toasted, paste, non-alcoholic beverages, flakes, native pearl quinoa, superior, organic, gourmet, natural, caramelized, expanded, pre-cooked, sugary, among others, showing a trend of diversification (Adex Data, 2021). The European and American companies are the ones that sell quinoa in healthy organic markets and some NGOs that promote their trade in solidarity markets in Europe and the United States.

Peru imports quinoa mainly from Bolivia, the legal import is small, it was 1 ton in 2012 and 106 tons in 2015. Bolivian quinoa is well evaluated and preferred for its good presentation, few impurities and larger grain size, imports increase at annual rates of 33% from 2013-2020. There is also smuggling of fluids on the border of Desaguadero (Peru-Bolivia), according to Gout (2013) and IICA (2015), the quinoa that enters Peru from Bolivia, is traded internally, or exported as Peruvian, with an estimated illegal entry. between 8 thousand and 12 thousand tons per year.

The Apparent Domestic Demand (DIA) determines the amount of food available for human consumption and other uses in the national territory in the year, such as Supply Balance, and results from the sum of Production (QN) with Import (I), discounting exports (E): DAY = QN + I – E. The DAY of the week shows its stability even before the IYQ (2010-2012), and subsequently it becomes highly variable, oscillating between 33,000 tons and 78,000 tons. The QUI per capita of the quake (total DA/total population) shows an average value of 1.4 kg per year from 2010-2020, but if illegal imports are considered, their average would be 1.8 kg in those same years.

According to FAO-ALADI (2014), the estimated consumption of quinoa for 2012 in the main producing and exporting countries in kg / person was 2.4 in Bolivia, 1.2 in Peru and 0.02 in Ecuador. In the producing areas, Hinostroza (2016) estimates that 95% of the urban population consumes quinoa, and in Lima, the capital of the country, Mercado and Luján (2020) estimate that 88% of the population consumes quinoa, with its consumption lower in the A/B strata. high, in relation to the low D/E strata.

The expansion of the quinoa’s external consumption is linked to healthy food, associated with organic products or cultural tradition, the interest of the foreign market has promoted its diversification and uses: (i) type of food for human consumption given its high nutritional value as an input in various culinary preparations, in the national market the main forms of consumption are pearl quinoa, flour, flakes, precooked, nutritious bars, energy bars, nectar, biscuits, breads, cakes, expanded, beers, extruded, among others; (ii) Pharmaceutical and pharmaceutical industry, due to their vitamin content, mineral salts, and those aimed at the tolerance of the celiac patient that would ensure a large international market; (iii) In the cosmetic industry, beauty and personal care products, in products such as soaps, shampoos and body creams, due to the biochemical properties that make it competitive with other products of similar use; (iv) Uses of cultural content in the Andean region.