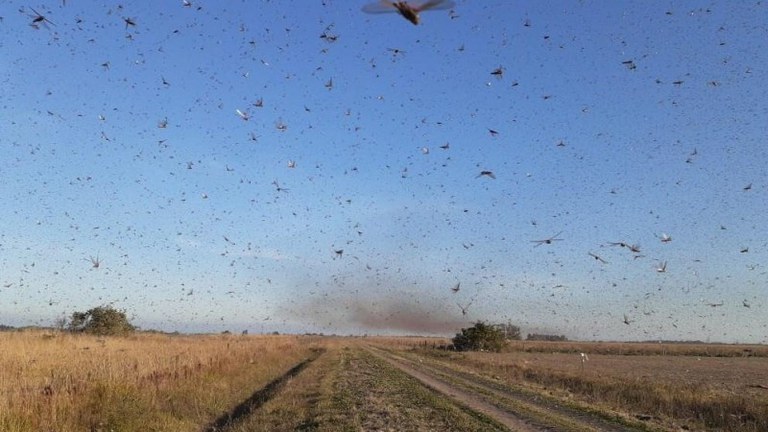 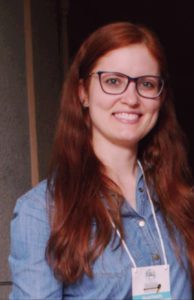 The locusts that have recently terrified South American producers by the formation of swarms (technical term for the group of locusts that move forming “clouds”) are of the species Schistocerca cancellata (Serville, 1838). This species can be recognized by its elongated body (males approximately 3-5 cm and females, 4-6.5 cm), color ranging from light brown to brown and wings with brown spots.

They are locusts that have two phases in their development: the solitary phase and the gregarious phase. In the solitary phase, juveniles and adults develop close to the plants they feed on, but do not aggregate or migrate. However, when population density increases and climatic factors are favorable, there are also physiological changes that direct the behavior of these locusts to the formation of agglomerations. Thus, from this gregarious behavior, the color of these nymphs changes, making them darker and these locusts begin to move together forming the swarms that, consequently, by voraciously exploring the natural and cultivated environments, increase the volume of consumed food.

Females of the species Schistocerca cancellata are able to produce approximately 80 and 120 eggs at each laying, and can present up to three generations per year. Thus, this species reproduces, generating many new individuals that join when climatic conditions are favorable, making this physiological issue a problem. Like most insects, this species of grasshopper responds to environmental variations and the availability of food. In the regions of the Brazilian territory where there was the possibility of displacement of the swellings, the hot and dry climate that is not common at this time of the year and the absence of natural enemies provided the aggregation of individuals and the observed overpopulation. The formation of swarms is a natural phenomenon, but there are indications that this phenomenon can also be intensified by environmental imbalances and the growing and intense climatic changes caused by human actions in nature.

For the species Schistocerca cancellata, there are reports that indicate that between 1897 and 1950 there were recurrent infestations in Argentina, Brazil, Bolivia, Paraguay and Uruguay. One of the last reports of the intense presence of these locusts in Brazil occurred in Rio Grande do Sul and Santa Catarina between 1946-1948, where damage was reported in several crops such as wheat, barley, corn, beans, potato, lemon, cotton, peanuts, sorghum, sugar cane, eucalyptus and pastures. In the eighties, we had infestations in Mato Grosso and some states in the Northeast by other species of locusts. These examples show us that the formation of swarms or the intense presence of locusts in the environments has already occurred in South America and Brazil on several occasions and perhaps, due to the way in which this information is now rapidly disseminated, this case has received more attention and repercussion. than other episodes of ‘outbreaks’ from past times.

The most effective way to prevent the formation of swarms is the constant monitoring of this species. Populations should be prevented from growing and aggregating and this can be done by periodically reviewing the laying locations to check birth rates. When verifying the presence of locusts, the application of control methods such as Biological Control, with the use of entomopathogens (we even have many studies in this line developed by Brazilian researchers) has relevant results in the management of this insect. In the absence of programs that do this monitoring and preventive measures that are taken in an assertive way, the way to alleviate the situation is to limit the size of the lungs through the use of chemicals.

The swarms of locusts began to be combated with insecticides from the 1950s with aerial spraying, however the environmental impact of these applications was intense for several local communities adjacent to the application areas. Thus, this control needs to be meticulously planned, as the swarms move during the day and also use the air currents to move. Insecticide applications through aerial spraying during these displacements are not viable. It is recommended to monitor the displacement of these swarms and at the end of the day, apply the insecticide during the time of rest of these insects. Attention should be paid to the form of application and the product used to optimize the control action and decrease the action of the products against non-target organisms.

The use without technical criteria of insecticides causes losses of several organisms, including locusts. The control of Schistocerca cancellata must be carried out with the aim of reducing the population density of the species and not eliminating it completely from the environment. This is important to mention, since locusts have several ecological functions: (i) as defoliators, they act as primary consumers in the energy flow of the trophic chains; (ii) they are a source of food for various insects and vertebrates such as birds, frogs, lizards, etc. and (iii) their feces and decomposing body generate nutrients for the soil. Thus, the complete extermination of these organisms is not a healthy practice for the environment.

The presence of the swarms is harmful to ecosystems because they also cause a decrease in resources for other species. Since these locusts are polyphagous, they feed on any type of vegetable they encounter on their way. Thus, the supply of resources for other animals decreases dramatically, causing another series of environmental imbalances.