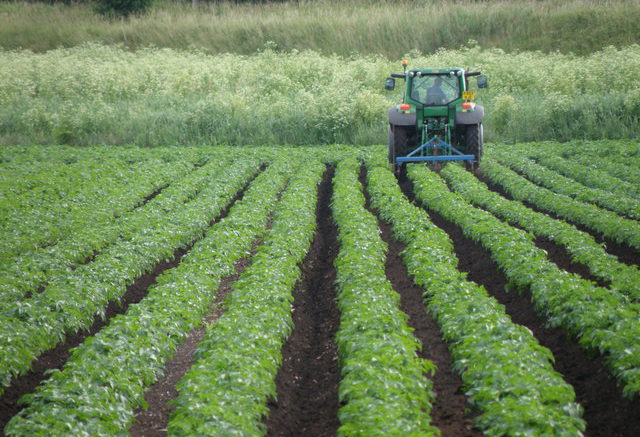 Carlos Hamahiga is an agronomist and partner at the Nascente, focused on the production chain of industrial potato chips and frozen pre-fried French fries. For the potato chip industries, the Atlantic variety and other protected roundshaped varieties are planted.

For frozen pre-fried industries, they use the elongated format varieties, the main varieties being: Markies and Asterix. They operate in the state of Minas Gerais, in the Alto Paranaíba region, in the municipalities of São Gotardo, Rio Paranaíba, Ibiá and Araxá.

José Theodoro Swart, based in Campos de Holambra, in the municipality of Paranapanema, State of Sao Paulo, an agricultural producer, today he has an arable area of 3,000 hectares being owned and leased, the main crops on the farm are wheat, soybean, cotton, corn, black-beans and potato. José started growing potato in 1995, targeting it for the market. In 1997 he started to produce the Bintje variety for industry. Currently they multiply and produce the FL1867 and Atlantic varieties for processing.

AgriBrasilis – What new technologies are being incorporated into potato cultivation?

José Swart – Risks and challenges for potato production are: Climate change, that influences pest and disease control; Thinking about it, we at JTS started our management with Biological Control in an on farm production system, being a more effective control for the soil, and with less added value.

Water availability: With increasing difficulties to produce food, we at JTS invest in water control, avoiding waste and excessive irrigation, we have the company’s “i-Crop” for Irrigation Management, which gives us guidance for the best possible irrigation. Today, our mill has a processing system where the water used is 100% reused, which we call a closed system, where we do not waste water.

Potato is a nomadic crop, so ideally the same area is only replanted every 6 years. We must constantly lease areas. What we have been doing for a few years is to always lease for the long term, which allows us to carry out better soil correction and a crop rotation ranging from potatoes to cereals and cotton.

AgriBrasilis – What is the reason for the price increase in the last 12 months?

Carlos Hamahiga – Potato market is unstable, like all other vegetables, due to factors such as weather, heat and excessive rain, contributing to a reduction in supply, in the months of April, May and June. In the following months of July, August, September until October, it comprises the period of greatest supply due to favorable weather in the productive states of São Paulo, Minas Gerais and Goiás, defining the period of lowest price due to seasonal excess of supply.

From November to March, the offer is greater in the Southern states (PR, SC and RS). With a lot of dryland potatoes, so if the weather is favorable, with moderate rains, there is a large supply, in case of extremes of drought or rain, there will be a reduction in supply. November and December 2020 were marked by high prices.due to extreme drought in the South, the climate defining the market.

AgriBrasilis – What are the most common diseases in the region? How do you handle them?

Carlos Hamahiga – blackleg (phoma stem canker), caused by bacteria, Pectobacterium. There is no specific product. Management (avoid injuries, balance nitrogen fertilization) and use of less sensitive varieties. Common scab, caused by bacteria, Streptomyces scabies, attacks the tuber skin causing a lot of loss, there is no specific product. Soil management with crop rotation. Pinworm, this pest attacks the tubers in the initial stage of potato formation, compromising the quality and thus being rejected for processing. Control – through specific insecticides in the planting furrow and by spraying.