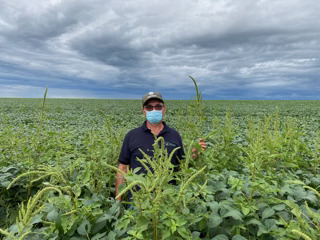 Inefficient weed management may cause significant damage to crops, resulting in major economic losses. The current challenge is the resistance of weeds to herbicides, which no longer achieve a satisfactory control, incurring in higher costs for farmers.

Pedro Jacob Christoffoleti wrote this article to AgriBrasilis about the resistance of weeds to herbicides and how farmers can deal with it.
Christoffoleti is an Agronomist from the College of Agriculture “Luiz de Queiroz”- USP, PhD in Weed Science, professor at ESALQ-USP, researcher, extensionist and consultant at PJC Agronomic Consulting.

The goal of weed management in Brazil is to reduce its negative interference on the potential yield. To this end, integrated management measures, such as cultural, mechanical and physical are taken. Herbicides, though, are the main tools used for achieving that goal in traditional agriculture, due to its convenience and suitable cost. However, this tool must be used effectively and with a broad spectrum of weed species control, selectivity and consider economic and environmental sustainability.
Brazil has expended 369,578.94 tons of technical products of herbicides in 2019 (IBAMA, 2020), that represents 59.56% of all phytosanitary products sold in the country. Among the most sold, glyphosate ranks first, totaling 217,592.24 tons, followed by 2, 4-D, totaling 52,426.92 tons. The next herbicide in the list ranks fifth (atrazine) with 23,429.38 tons applied in 2019.
Conversely, Brazil has experienced spectacular growth in agricultural food production. The two most eloquent indicators of Brazilian’s agricultural development are production numbers and yield. From 1975 to 2017, grain production went from 38 million tons to 236 million tons, growing more than six times, while the planted area only doubled. The greater production growth compared to the area growth can be seen through the evolution of the average yield of rice, beans, corn, soybean and wheat.
Within Brazilian agricultural scenario, where GMOs resistant to glyphosate are used in almost the entire area, the resistance of weeds to herbicides has become the major challenge for their management. 53 unprecedented cases of weed resistance to mechanisms of action ACCAse, ALS, EPSPS, photosystem I and II, Protox (PPO), and synthetic auxins have been already recorded in the country. The most worrying are certainly the 19 cases of resistance to glyphosate, 9 of which are multiple resistance. Among the species of weeds with resistance to glyphosate we highlight Amaranthus hybridus, A. palmeri, Chloris elata, Conyza bonariensis, C. canadensis, C. sumatrensis, Digitaria insularis, Echinochloa crusgalli, Eleusine indica, Euphorbia heterophylla and Lollium perene (Heap, 2021)
Relevant cases of herbicide weed resistance in Brazil
The first case of resistance to glyphosate in Brazil was detected in 2003, in Rio Grande do Sul state, in Lolium perenne ssp. Multiflorum, followed by Conyza bonariensis in 2005.
The first case of multiple resistance was also in L. perene, in 2010, resistant to both ACCase and glyphosate inhibitors. The most worrying case was reported in 2017 with resistance to five mechanisms of action, namely a C. sumatrensis, resistant to glyphosate, diuron, paraquat, 2, 4-D and saflufenacil herbicides. (Heap, 2021)
However, at present, what most afflicts grain farmers is resistance of the weed D. insularis, in addition to the three species of Conyza; Amaranthus and Eleusine indica. The following picture shows leaks of Amaranthus hybridus in soybean, a fact increasingly common in Brazil, especially in the Southern region.
The occurrence of weed resistance to ALS – inhibiting herbicides dates back to 1993, when I had the opportunity to confirm the resistance of beggarticks species (Bidens spp.) to that mechanism of action, with cases being reported later in Euphorbia heterophylla. However, the introduction of GMO resistant to glyphosate solved the problem. Likewise, grasses resistance to inhibitors ACCase detected since 1992 in plantain signalgrass (Urochloa plantaginea), a major problem in the past, was solved by GMOs.
Nevertheless, nowadays glyphosate resistance has become the problem, especially when combined with ALS and ACCase inhibitors resistance. In this case, it is more complicated to recommend control alternatives. It was found even in a Conyza sumatrensis population resistant to diuron, saflufenacil, glyphosate, chlorimuron and paraquat, that is five mechanisms of action. The amaranth species that are resistant to glyphosate are also resistant to ALS inhibitors. It stands out that weeds that are difficult to control by glyphosate are definitely difficult to be controlled.
There is also the introduction of the A. palmeri, an exotic weed in Brazil, which occurred in Mato Grosso state, and thanks to the effective action of State’s Agriculture Department containment measures, had its dispersion postponed.
On the other hand, Amaranthus hybridus is already adapted to the country and the presence of resistant populations in the South has worried farmers. Indian goosegrass (Eleusine indica) has been detected as resistant to ACCase inhibitors since 2009, and recently it was detected populations resistant to glyphosate.
The shrubby false buttonweed (Spermacoce verticillata L.) has been a major challenge to grain farmers especially in the North/Northeast, and Cerrado region (Brazilian Savanah). It is very difficult classifying this weed, being botanically classified by many researchers as Spermacoce verticillata. There are indications that other species are harder to control. Besides tolerance to glyphosate, this weed also cannot be controlled by 2,4-D based herbicides, which even antagonizes glyphosate.
Another problem farmers have faced, which reflects on management and prevention of weed resistance, is the ban of paraquat pre-harvest application on soybeans. This application is responsible for eliminating late infestation weeds. The alternatives are either of low availability in the market or other herbicide with diferent mechanisms of action.
It is also of concern the control of volunteer plants, from the previous crops. The fact that soybean is followed by corn, or cotton, and all the three of them usually apply varieties resistant to glyphosate, makes its management complex. 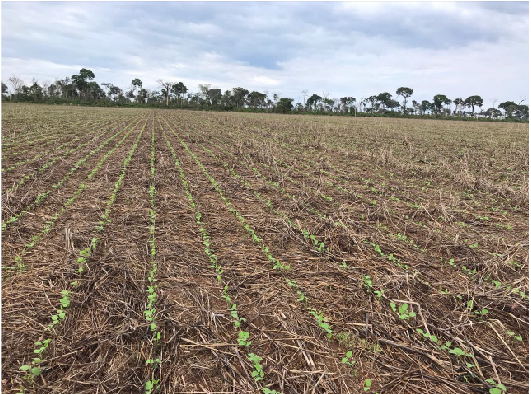 Soybean over Urochloa decumbens straw, showing the suppressive effect of mulch over weeds, mainly over weeds resistant to herbicidessPrevention and management of weed resistance
Adopting a proactive strategy is certainly the best way to avoid that weed resistance problems evolve further into the production systems. Nonetheless, many farmers have this problem already established on their properties, requiring reactive measures.
Among the best strategies, there has to be diversification, of crops and herbicides. This strategy reduces selection pressures imposed to resistant weed populations.
Some regions in Brazil have the possibility to grow, up to 2.5 harvest per year, which allows crop diversification, that is certainly the basis of proactive prevention measures and weeds resistant to herbicides management.
However, the most important aspect in this system is in leaving mulch in the winter off-season, after the second harvest, the way it is done in the Center and North of Brazil, where Brachiaria can play a fundamental role in this process. In figure 2 an area can be seen where the sequence of crops was soybean, followed by second harvest corn, and then brachiaria grass (Urochloa decumbens), as a cover crop. The picture illustrates soybean being grown in this area, where resistant weed management was clearly effective, by the straws left on the soil surface. The management is aided by the application of residual and post-emergent herbicides.
Another management practice that has been helping farmers to prevent weeds resistant to herbicides is the integration of second harvest corn interspersed with the Urochloa decumbens, which brings the benefit of forming straw on the soil surface during fallow period. Therefore, brachiaria is sown intercalated with corn in a system that prevents competition from other plants, also after the corn harvest, brachiaria remains vegetating until sufficient biomass is formed, so after desiccation it suppresses weeds resistant to herbicides.
A second practice adopted in Brazil, which has contributed to slow or even control efficiently weeds resistant to herbicides is the use of pre-emergent / initial post-emergent action herbicides, associated with GMOs that are resistant to glyphosate. When applied to weeds in pre-emergent conditions, herbicides can control the seeds, promoting a competitive front to the crop, which emerges before weeds, avoiding early competition (when weeds emerge with or even before the crop). Pre-emergent herbicides also provide diversification of the mechanism of action, in addition to making selective herbicides application more flexible in the post-emergent phase.
Nonetheless, in this practice, farmers must know some aspects of the herbicide behavior in the soil and on straw, when under a no-tillage system, otherwise herbicide selectivity and efficiency problems might be faced. This is the reason why at the moment the rate of this practice is still low. We need new technologies or innovations within the ones that already exist, mainly regarding herbicide associations and formulations so that the use of residual herbicides becomes more and more an efficient tool in the management of resistant weeds. 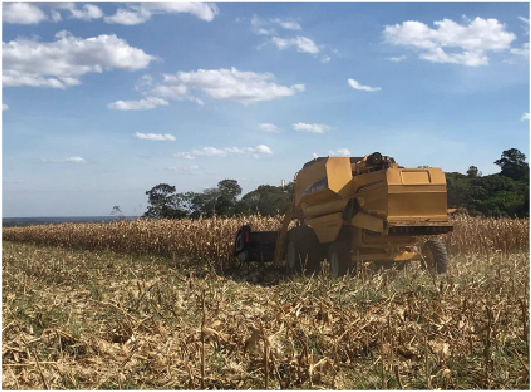 There are also new GMOs being introduced in Brazil, such as resistant to auxinic herbicides. From the agriculture point of view, there is no doubt that this will help to manage dicotyledonous resistant weeds in the systems, however, we need to overcome the challenges that these technologies will bring, regarding best practices of application technology and drift and volatilization problems.
Preventing the production of weed seeds resistant to herbicides is certainly a measure considered by farmers, although it is hard to be executed. Field edges or roads can act as a source of resistant weed dispersion. In addition, transportation of machinery and equipment across the country is a practice that needs better planning to avoid dispersion of resistant weeds, considering the fact that Brazil is a country of continental dimensions. Likewise, the borders with other countries that produce grain, such as Paraguay and Argentina have been the focus of entry to resistant weeds in the country. There is suspicion, for example, of the introduction of sourgrass (Digitaria insularis) and green amaranth (Amaranthus hybridus)
Recommendations of a production system for weeds resistant to herbicides prevention and management are simple: diversity of systems. Diversity meaning not only use of herbicides with different mechanisms of action, but also different crops, monoculture is not a good practice for this goal. Following the farming best practices contributes to the sustainability of yields.
“Farmer, do practice crop rotation, use herbicides with different mechanisms of action, follow the recommended doses, and do post-harvest control to avoid enriching weed seed resistant bank. Take preventive action. ” 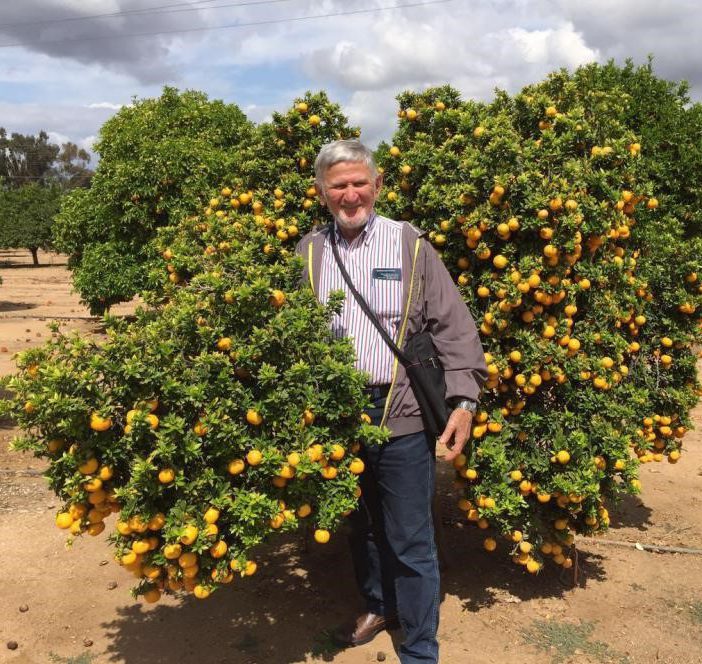