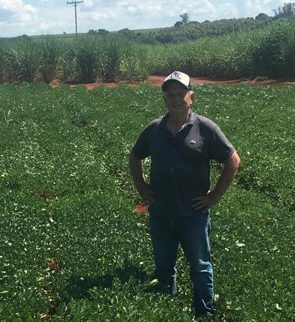 90% of the production is concentrated in São Paulo state, despite the agricultural zoning says it could be grown in the whole country, and it is a good option for the renewal of sugarcane and pasture areas.

About 700,000 tons of in shell peanuts are harvested in the country currently, in 200,000 hectares planted annually. 60% of this production is exported  in natura  to European Union, East European countries and Middle East.

AgriBrasilis – What is the relevance of peanut crops?

Godoy – Peanut is a worldwide known product, used in two main forms: oil and grain. The oil has great cooking qualities, being consumed largely in Asian countries, mainly China and India. Western countries also consume peanut oil, but its main destination is food industry, in the form of pastes, sweets and confectionary. In Brazil, peanut is used mainly for the confectionary industry, there is also oil, but as a by-product.

São Paulo state concentrates 90% of Brazilian production, driving the economy of many municipalities located in the region of Ribeirão Preto, Sertãozinho, Jaboticabal, Borborema, Tupã and Presidente Prudente. Therefore, peanut is an important activity that creates jobs and income for these regions, both in farms and in the processing agroindustry, aiming exports and home confectionary market.

AgriBrasilis – What are the limitations to expand peanut crops?

Godoy – The expansion of peanut crops is conditioned to the need of investments for a production that has volume and quality. In the farm level, there is need of specific machinery to harvest (uprooting plants and striping). In post-harvest, the use of artificial dryers is necessary to quickly remove moisture from the pods to prevent the proliferation of fungi that affect the quality of the product. There is need of facilities for storing, debarking and grain selection.

In addition to these investments, the costs of growing it are also high. It weighs the costs of pesticides and leasing. Most farmers grow peanuts in leased areas.

AgriBrasilis – How do peanuts interact with other crops in rotation?

Godoy – In São São Paulo state, peanuts are planted largely in sugarcane renewal areas. This rotation scheme is beneficial for both sugarcane and peanut. Peanuts planted after sugarcane benefits from less pests pressure, while sugarcane planted after peanuts benefits because a leguminous species, peanut  fixes nitrogen from the atmosphere, which is needed for the development of sugarcane plants.

Peanuts are also grown successfully in areas that were previously pastures. In this case, because they take many years to be renewed, it is needed to prepare the soil, decompress it, correct its PH and replace nutrients.

Peanut crops can also be recommended after other annual crops whose characteristics are complementary, such as maize and cotton.

AgriBrasilis – What are peanut main pests and how are they managed?  Which products are used?

Godoy – Peanut is prone to many plagues and diseases. Thrips and some caterpillars can infest the crop and need to be controlled by pesticides. Diseases that affect the leaves are the most common, such as cercosporidium and rust. Their control is made with fungicides, but resistant plant varieties can also be used.

AgriBrasilis – What are the new technologies used in growing peanuts?

Godoy – Peanut growing is currently achieving high levels of technification, such as modern planting and spraying machines, in addition to growing automated operations. Genetic improvement and new varieties are also relevant for the evolution of this crop. In post-harvest phase, processing machines and quality management mechanisms enable more competitiveness to  he Brazilian peanut production chain in foreign markets.

AgriBrasilis – What is the profitability?

Godoy – For the technological standard of São Paulo state, it has been a good moment for both farmers and food chain. International demand and prices are stimulating for the activity, maintaining a safe profitability for the farmer.

Our yield is achieving gradually competitive levels, comparable to other countries. Farmers are harvesting on average 3,500 kg/ha of in shell product, but this could be improved, with some adjustments in the production system. With the current varieties, we could achieve 6,000 kg/ha.

However, the main adjustment to be done, together with technological improvement, is the reduction of costs. A better management and use of inputs, and the adoption of varieties more resistant to diseases are the main means to reduce costs.